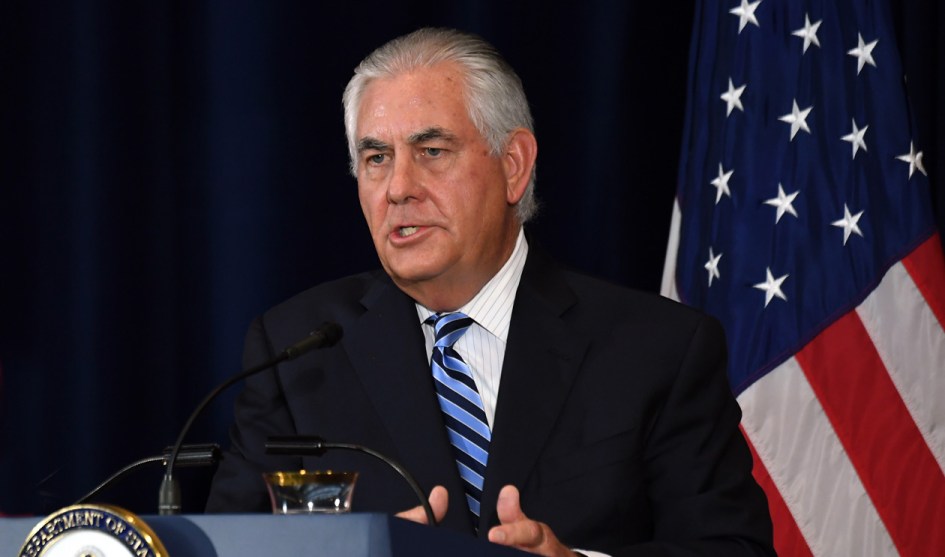 Over at National Review, Roger Clegg is unhappy:

Secretary of State Rex Tillerson has just given an appalling speech. From beginning to end it embraces bean-counting on the basis of race, ethnicity, and sex in order to reach the right percentages of this, that, and the other….Secretary Tillerson specifically promises a State Department “Rooney Rule”: “Every time we have an opening for an ambassador position, at least one of the candidates must be a minority candidate.” Not only is such race-based hiring divisive, unfair, and an endorsement of just the sort of identity politics that we ought to have learned by now is poisonous, but it is illegal.

This must have been quite a speech! So I clicked. Here are the relevant bits:

We have a great diversity gap in the State Department….Only about 12 percent of our senior Foreign Service officers are non-white. That number is about the same for our senior executive service.

To better understand our talent pool, I have directed the relevant committees to adopt a new procedure. Every time we have an opening for an ambassador position, at least one of the candidates must be a minority candidate. Now they may not be ready, but we will know where the talent pool is. A big part of developing our minority leadership is identifying qualified individuals five and 10 years before they are ready to become senior leaders and managing and developing their careers, as we do others, so that they’re undergoing preparations for those senior roles over time.

….We’re also going to re-examine and expand where we recruit from. As some of you know better than most, America’s best and brightest are not just from the Ivy League, but they’re from a lot of other places in the country – Laredo, Texas; Detroit, Michigan; Roanoke, Virginia. They’re kids sitting on the front row of their high school classes, they’re veterans from our military who are coming out of service looking for the next part of their career, and many of them with a strong desire to continue to serve their country. And they’re so gifted in many ways from many walks of life.

Tillerson doesn’t “embrace bean-counting” in order to “reach the right percentages of this, that, and the other.” He merely points out that 88 percent of Foreign Service officers are white. Nor does he really endorse the Rooney Rule. He does say that at least one minority candidate should be interviewed for all ambassador positions, but not because they’re likely to be hired. He wants to do this so “we will know where the talent pool is.” He explicitly says that he’s trying to identify non-white staffers five or ten years “before they are ready to become senior leaders.”

In addition, he wants the State Department to start recruiting from outside the Ivy League, something that any conservative ought to applaud. I certainly applaud it.

This is the problem with conservatives and race. National Review has been pretty good on Charlottesville, but when you turn to lower-profile things like Tillerson’s speech they suddenly become tone deaf. Tillerson is hardly offering anything radical here. He notes that the State Department is a pretty white outfit. He proposes a concrete program to start developing minority talent early. He says they want to start recruiting in places outside the Ivy League. He says they’re going to start recruiting more from the US military. He says diversity is good: “And so whether it’s African American, Latino, Hispanic, women, LGBT, come with experiences I do not know. This enriches the quality of our work. We know we are a stronger organization when we embrace, incorporate diverse points of view into our work product.”

This is a very modest program. It’s not as if Tillerson has invited Black Lives Matter over to advise the State Department. And yet Clegg is outraged. It’s “divisive,” “poisonous,” “illegal,” and “the crudest of stereotyping.” The answer to racial discrimination, he says, is to do absolutely nothing: “This week’s lesson for the Trump administration: It needs to embrace E pluribus unum, and make clear its categorical rejection of identity politics and race-based policy and action, whether politically correct or politically incorrect.”

Nothing. And then conservatives complain that nonwhites all mindlessly vote for the Democratic Party.