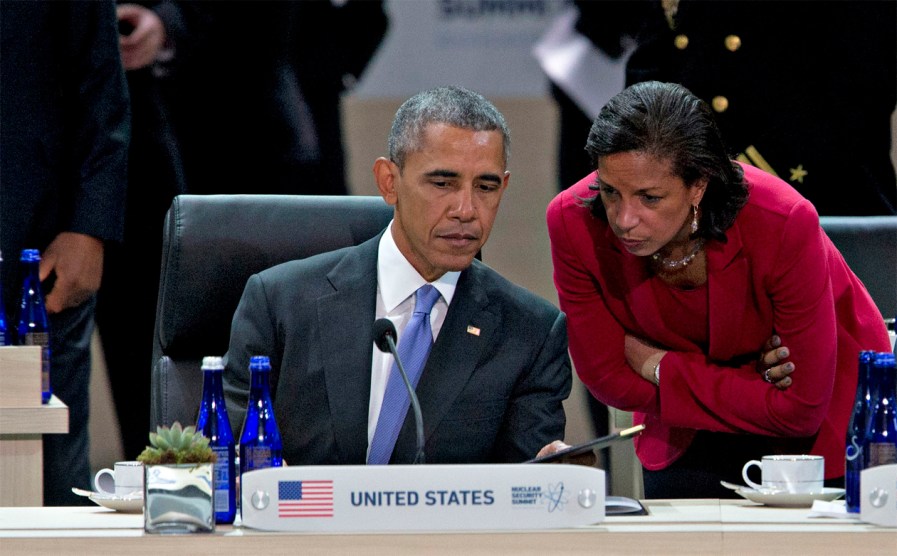 Susan Rice, the right’s favorite new¹ punching bag over the past few years, talks about her experience of continuing to be a punching bag even after she left government service:

I ask Rice why she thinks she became a target. She laughs, sort of. “I’ve spent a lot of time thinking about this. What do you think?”

I mention Benghazi, the moment when much of the right’s base became aware of Rice’s existence. “Does it start there?” she asks. She is not a person given to agitation, but here, Rice’s focus sharpens — she looks at me more directly, with heightened intensity. “And why me? Why not Jay Carney, for example, who was then our press secretary, who stood up more?”

Carney isn’t an African-American woman, of course….I point out that she has a reputation for being tough, and a strong-willed woman who seems sure of herself makes a certain kind of man nervous.

“Let me just put it this way,” she says. “I do not leap to the simple explanation that it’s only about race and gender. I’m trying to keep my theories to myself until I’m ready to come out with them. It’s not because I don’t have any.”

Well, I for one will be eager to hear her theories once Rice decides she’s ready. Rice is certainly the most unfairly maligned public servant of the past few years, all because she went on TV and told the truth about Benghazi. That was her real sin, of course.³

And as long as we’re on the subject, I’ll just take this opportunity to add that progressives didn’t exactly cover themselves in glory while Rice was being endlessly slandered by conservatives over Benghazi. For weeks they mostly held their tongues or damned her with faint praise (“she probably shouldn’t have mentioned the video….”). But Rice literally did nothing wrong. Zero. On her infamous Sunday show appearances, she told the absolute truth as it was then understood by the intelligence community. This was, unfortunately, a precursor to progressives also failing to aggressively defend Hillary Clinton over her emails. Why? I suppose because lots of progressives were afraid there might be a smoking gun somewhere and didn’t want to risk coming strongly to her defense and then looking foolish. Cowards. In the end, of course, we eventually learned that Clinton had also done literally nothing wrong and the FBI never had even a weak case against her.

²Both of whom are also women. Kinda makes you think, doesn’t it?

³Aside from being female and black, that is.