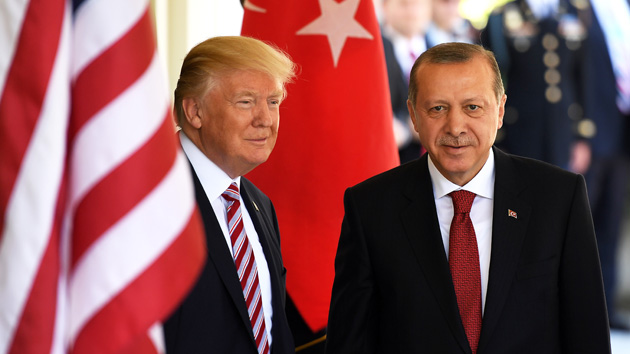 This would normally be big news, but it’s been overshadowed by all things Trump:

WASHINGTON – Supporters of President Recep Tayyip Erdogan of Turkey, including his government security forces and several armed individuals, violently charged a group of protesters outside the Turkish ambassador’s residence here on Tuesday night in what the police characterized as “a brutal attack.”

Eleven people were injured, including a police officer, and nine were taken to a hospital, the Metropolitan Police chief, Peter Newsham, said at a news conference on Wednesday. Two Secret Service agents were also assaulted in the melee, according to a federal law enforcement official.

The current story from Erdogan is that his folks were acting in “self defense,” which is absurd. Eyewitness accounts, along with the testimony of Washington DC’s police chief, confirm that the protest was loud but peaceful until Erdogan’s goons waded in and attacked.

This was all happening while President Trump was hosting a visit with Erdogan in the White House. Naturally they haven’t said anything about this. Hell, Trump probably wishes he had a security force that would do stuff like this.

I don’t have anything non-obvious to say about this. The descent of Turkey into a strongman state is discouraging, and there’s no sign that it’s going to turn around any time soon. I just didn’t want to let this pass without at least a mention.