Today’s photo might not seem like much. But sometimes what’s important isn’t what’s there, but what’s not there: 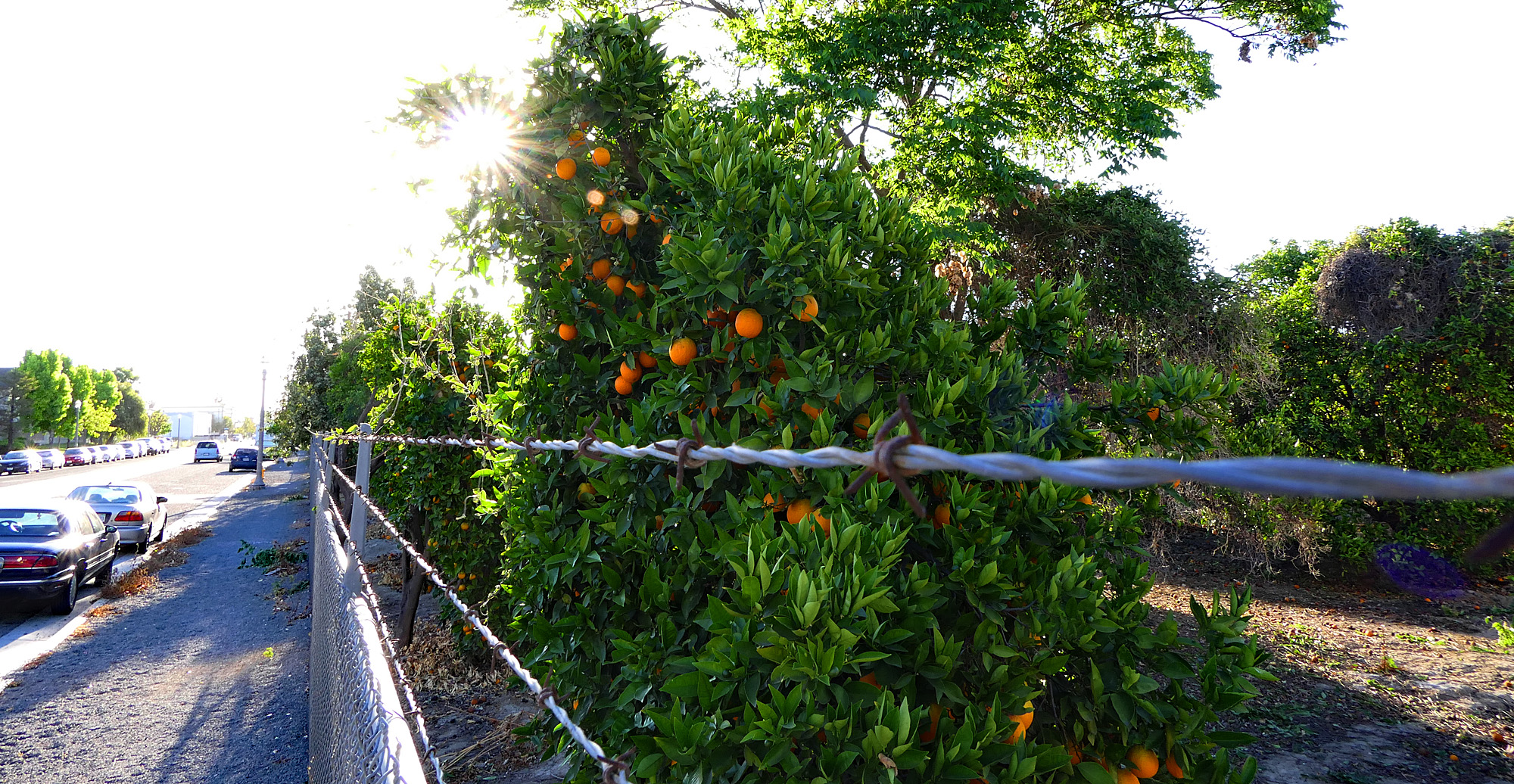 It’s nothing special, just a small orange grove on the corner of Helena and Santa Ana St. in Anaheim, about a mile from Disneyland, and it’s the last orange grove in the city. Here’s what’s missing: 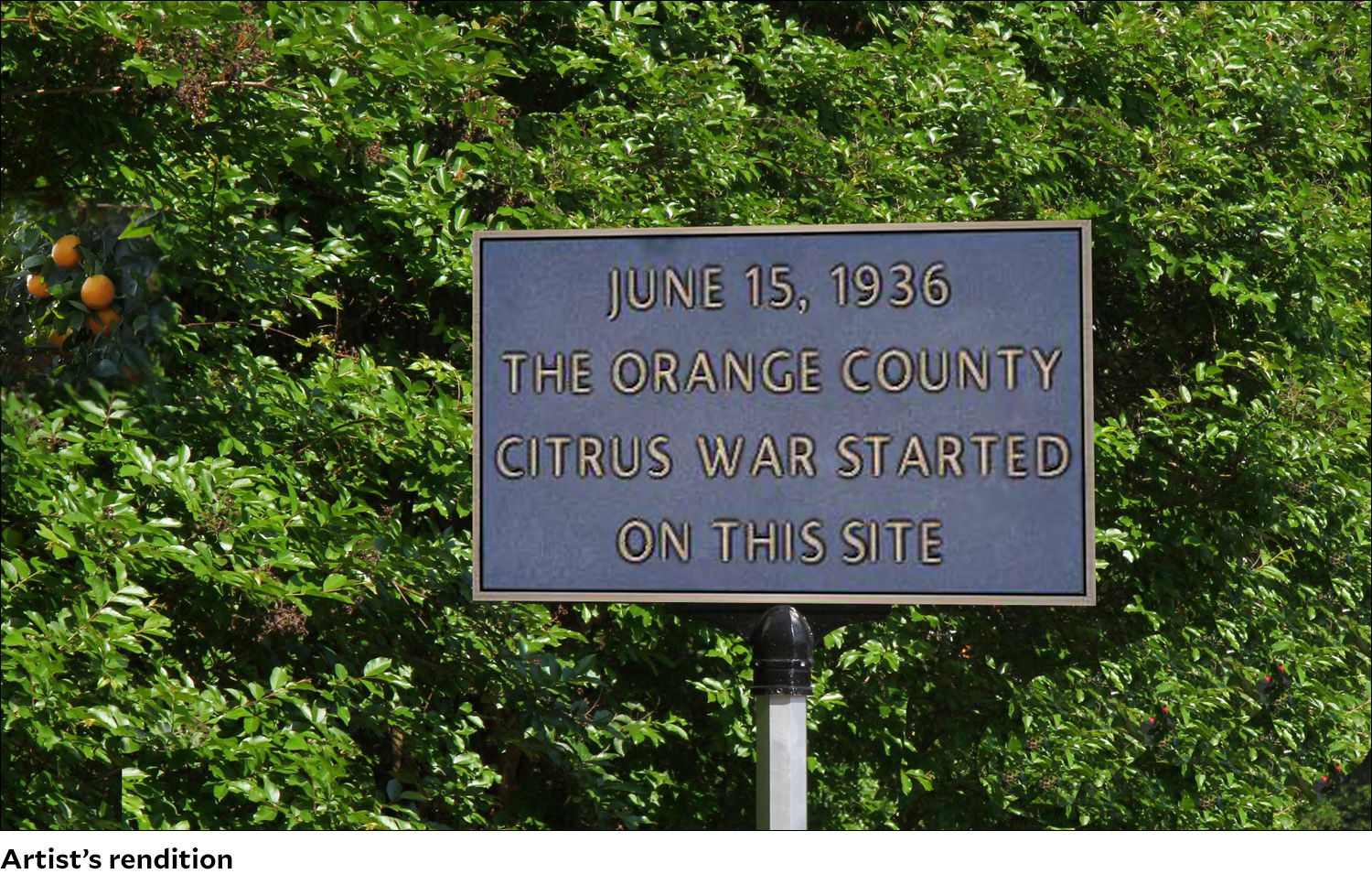 You’ve all heard of the Haymarket bombing and the Ludlow massacre and the Harlan County War. We don’t have any labor history quite like that here in Orange County, but we do have the all-but-forgotten Citrus War. On June 11, 1936, orange pickers in Anaheim, Fullerton, Tustin, and elsewhere went on strike, demanding better wages and the end of a corrupt bonus system. OC Weekly editor-in-chief Gustavo Arellano has almost single-handedly worked to revive the memory of this strike, so I’ll let him pick up the story from there:

On June 15, 1936, at the break of dawn, about 200 Mexican women gathered in Anaheim to preach the gospel of huelga—strike….The women spread across the groves of Anaheim, the heart of citrus country, urging workers to let the fruit hang. Twenty Anaheim police officers confronted the women; they refused to disperse. At some point there was an altercation, and 29-year-old Placentia resident Virginia Torres bit the arm of Anaheim police officer Roger Sherman. Police arrested Torres, along with 30-year-old Epifania Marquez, who tried to yank a strikebreaker—a scab—from a truck by grabbing onto his suspenders….Torres and Marquez received jail sentences of 60 and 30 days, respectively. But Orange County responded with an organized wrath years in the planning.

….Wonder why Orange County trembles whenever its Mexicans protest? Welcome to the Citrus War of 1936, the most important event in Orange County history you’ve never heard of.

Orange County leaders kept up a brave public face, but as the strike continued they began to panic. Sheriff Logan Jackson deputized hundreds of men and arrested dozens of strikers and sympathizers on flimsy charges. They were all tossed in jail with no jury trial. In early July, with violence breaking out on both sides, Jackson deputized more guards and armed them with taxpayer-supplied shotguns:

Orange County now had 400 emergency deputies. Police departments across the county asked merchants not to sell ammunition to Mexicans anymore. It was time to end the strike.

….Strikers fought with “iron bars, clubs and their fists,” according to the Register. Guards responded with guns….The Sheriff’s Department and politicians quickly responded. Officers pulled over anyone who looked Mexican and was close to the fields; by the end of July 7, deputies crammed over 200 Mexicans into Orange County Jail, charging them with rioting even though most were far from the scenes of fighting.

With that, the war was really and truly on:

Progressive journalist Carey McWilliams, who chronicled “the rise of farm fascism” in California during the 30s, wrote that the Orange County strike was “one of the toughest exhibitions of ‘vigilantism’ that California has witnessed in many a day….Under the direction of Sheriff Logan Jackson, who should long be remembered for his brutality in this strike, over 400 special guards, armed to the hilt, are conducting a terroristic campaign of unparalleled ugliness.” But it worked. As the terror campaign against the pickers escalated, union solidarity began to unravel. On July 27, pickers and growers reached an agreement that raised wages modestly but didn’t allow the pickers to unionize. After six weeks, the Citrus War was over.

There’s still not so much as a plaque to tell you where the Citrus War started. However, two years ago a memorial called the “Table of Dignity” was commissioned at the Orange County Fairgrounds. Unsurprisingly, it suffered through endless problems, was closed, then renovated, and finally, after going wildly over budget, is now set to be reopened during the summer fair this year.