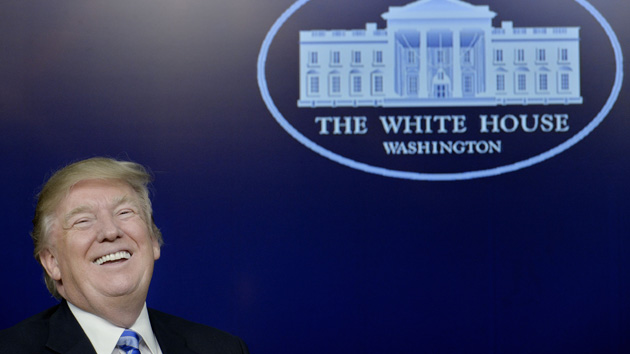 There’s so much to learn in the world. A couple of days ago, for example, the Department of Health and Human Services issued this statement regarding CSR subsidies for Obamacare:

The New York Times report is inaccurate. The administration is currently deciding its position on this matter. We have not been contacted by Democrats to help save Obamacare, perhaps because they consider Obamacare to be a losing cause. Democrats need to help solve this failed Obamacare plan.

That sounded really aggressive for an agency statement, and I was a little surprised. How had they picked up the Trump style and rhythm so perfectly? Today I learned the answer via Politico:

Two administration officials said the HHS rebuttal was personally ordered by an incensed Trump, who feared that the Times story hurt his negotiating position. Trump took the unusual step of calling HHS Secretary Tom Price to dictate a blistering statement that challenged the story and swiped at Democrats, one senior administration official said.

Today Trump made his position even clearer. Insurers will most likely pull out of the exchanges or jack up premiums if CSR payments are halted, and Trump said explicitly that he was willing to do this if Democrats didn’t come to the table. I’m not a world-class negotiator or anything, but isn’t it sort of unusual to talk openly about your threat to personally blow up Obamacare unless Dems knuckle under? That makes it hard to subsequently blame Democrats, doesn’t it?

In other news, I’m not the only one who’s been learning new things. A few weeks ago Trump announced that health care was a lot more complicated than he had thought, and today he explained that Chinese President Xi Jinping schooled him on North Korea too:

Mr. Trump said he told his Chinese counterpart he believed Beijing could easily take care of the North Korea threat. Mr. Xi then explained the history of China and Korea, Mr. Trump said. “After listening for 10 minutes, I realized it’s not so easy,” Mr. Trump recounted. “I felt pretty strongly that they had a tremendous power” over North Korea,” he said. “But it’s not what you would think.”

This is probably something I would have kept to myself, but maybe that’s wrong. I suppose Trump is setting a good example by showing that you’re never too old to listen and learn.

What else? There was this:

Trump reverses on NATO: ‘I said it was obsolete. It’s no longer obsolete’ https://t.co/9lqFHtBnwN pic.twitter.com/3kRRjyNdku

That was quick! Hooray for NATO! However, it’s unclear what produced this change of heart. Was it the influence of H.R. McMaster? The alleged Russian collusion in Syria’s use of chemical weapons? Or did the NSA pick up some sigint of Vladimir Putin mocking Trump?

In an interview with the Wall Street Journal today, Trump also said he’s changed his mind and now supports the Export-Import bank. He’s also thinking about reappointing Janet Yellen as chair of the Fed. And this:

Asked how he has changed since taking office, the former businessman—who as a candidate touted his ability to cut deals—said: “The magnitude of everything is so big, and also the decisions are so big. You know, you’re talking about life and death. You’re not talking about ‘you’re going to make a good deal.’”

Huh. The presidency isn’t just about making good deals. Since that was basically Trump’s sole alleged qualification for the office, I wonder what role he now thinks he’s going to play?