The Wall Street Journal has a chart-heavy piece today about the growth of big companies vs. small companies, and it’s interesting in detail even if the overall thesis is hardly a surprise. I was going to highlight a chart showing the basic growth of employment in different sizes of companies, but the Journal published two charts about this and they don’t agree with each other. So I’m not sure which one is correct.

In any case, this one is more interesting anyway: 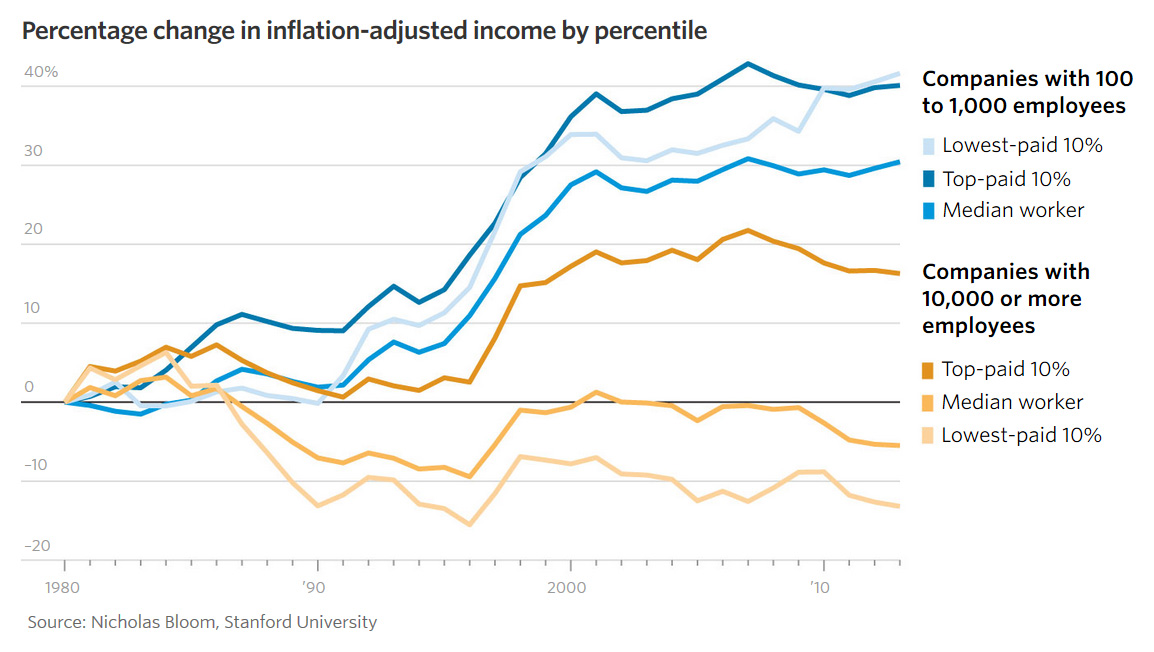 Among big companies, it’s exactly the opposite. Even the highest-paid workers only make about 15 percent more than they did in 1980, and everyone else actually makes less. Why? There are only two possible answers: (a) big companies haven’t grown much, or (b) the executive suite and the shareholders are taking a far bigger cut of the profits than before. We know the answer isn’t (a), so it must be (b).

Why is this? My guess is the obvious one. In a large company, the workers are just a line on a spreadsheet. If you pay them less and the company keeps on running, it’s all good. They occupy approximately the same mental space in the CEO’s mind as the cost of capital or expenditures on SG&A.

In smaller companies, the CEO knows the workers. Maybe not all of them, but at least a few hundred of them. They talk in the lunchroom and see each other at company picnics. If one of them has a kid with cancer, the news probably trickles up. Depending on how old the company is, the CEO and her top staff probably personally hired a lot of these people. It’s not that labor costs don’t matter, but there just isn’t the incentive to pay themselves astronomical salaries at the expense of everyone else.

These are the best companies to work for. They’re big enough to be stable, but small enough not to be stultifying. Obviously some kinds of companies just can’t be medium-sized, but plenty can be. If you can find a good one that wants to hire you, run don’t walk.