The U.S. economic expansion is now the third-longest on record and showed no signs of letting up in February, with robust hiring, falling unemployment and firmer wage growth opening the way for the Federal Reserve to raise short-term interest rates….Average hourly earnings in the private sector rose 2.8% from a year earlier,1 a sign that the tightening job market is pushing employers to raise pay.

“Firmer wage growth.” Maybe so. But overall wages can be skewed by big gains at the top, so every month I look at production and nonsupervisory workers as a gauge of how wages are doing for ordinary people. Here it is since the end of the recession: 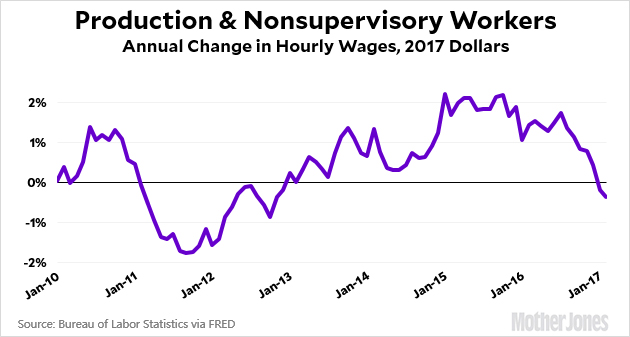 Production and nonsupervisory workers had a pretty good 2015, notching wage gains a little over 2 percent (adjusted for inflation). But it’s been downhill ever since, and they’ve actually seen wage cuts in the first couple of months of 2017. Maybe the economy is overheating, but it sure looks to me like inflation is still pretty restrained and a lot of people aren’t seeing that supposedly tighter labor market.

1This is not adjusted for inflation, so even for the broad labor market, wage gains haven’t been all that impressive recently.