California has made a lot of noise about being the front line of resistance to President Trump, but mostly it’s just blather. This week, however, it’s finally getting very real:

President Trump will direct the Environmental Protection Agency on Wednesday to shelve aggressive vehicle fuel economy targets that are a pillar of climate action and anti-pollution efforts in California and nationwide, according to a senior administration official.

…Targeting them puts the White House on a path of direct and costly confrontation with California….Under the Clean Air Act, the state has the authority to impose emissions standards stronger than those set by the federal government, and a dozen other states have embraced the California rules, as the act allows. About 40% of the vehicles sold in America are subject to the rules California sets. Automakers have said repeatedly that it is untenable to manufacture separate fleets of vehicles to meet different standards.

The state had refrained from charting its own course on mileage goals as part of a compromise with auto companies and the EPA early in the Obama administration. That agreement will start to unravel Wednesday with Trump’s action, which will direct the EPA to re-open the rule-making for the mileage standards. If, as environmental and auto lobbyists anticipate, the administration ultimately decides to weaken the rules, California will almost certainly move to invoke its federal waiver.

There are other disputes on the horizon between California and the Trump administration, but this is the first big one. From the very beginning, California has had an exemption under the Clean Air Act to set its own standards, and these standards have often led the nation. The state is pretty jealous of this prerogative, and it will fight to prevent any change to the law that weakens it. However, unless the Trump administration succeeds in doing that, it’s likely that California will adopt the current EPA standards and car companies will follow along even if Trump trashes the federal rules. It’s either that or build two separate fleets of cars, one for California and its fellow green states, and one for everyone else. 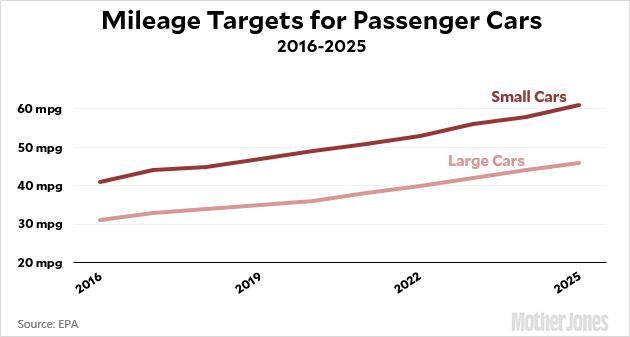