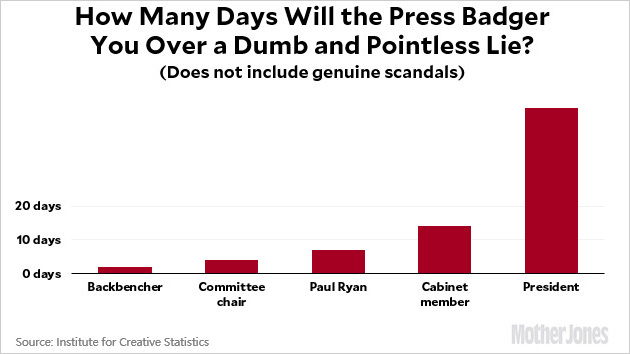 Nancy LeTourneau suggests that Donald Trump is surprised that we’re all still talking about his accusation that President Obama had him wiretapped during the campaign:

In the two weeks since he sent those tweets, both the media and members of Congress have gone on a fishing expedition to investigate his claims. It’s clear he was lying. But during an interview last night with Tucker Carlson, Trump indicated that he wants to move on….Instead of acknowledging the obvious, he promises to produce (non-existent) evidence that he was right. It will all come to light sometime in the future.

….Trump’s pattern is to pretend that evidence to support his lies is forthcoming and assume that our collective attention span is as short as his when it fails to materialize.

This is a lesson Trump learned during his decades as a B-list celebrity. If you say something outrageous, it will get you attention from the Page Six crowd but it won’t last long. It doesn’t especially matter if it’s true or not true. It’s entertainment, and as long as it drives traffic it’s all good. In a few days it will get eclipsed by something else and everyone will lose interest.

Without giving it much thought, Trump probably figured the same was true of politics. And it is—but only up to a point. Even as a presidential candidate Trump could count on outrages dying out fairly quickly. But not as president. That’s the point where it’s not entertainment anymore.

Backbenchers in Congress can count on reporters getting bored with their dumb lies in a day or two. For senators and committee chairs it’s a few days. For Paul Ryan it’s a week. For cabinet members a couple of weeks tops. But for the president? Who knows? Weeks can stretch into months, and you never know when something will pop up years later to remind the press to badger you about it yet again. It’s a whole different world than Page Six.