Engagement Labs is a company that tracks “what people are talking about.” Brad Fay, one of their executives, tells us that during the presidential campaign people were talking very negatively about everyone. They were more negative about Donald Trump, but they were plenty negative about Hillary Clinton too. However, the gap between the candidates changed from time to time based on external events:

Most decisively, there was a sudden change in the net sentiment results that followed immediately after FBI Director James Comey released his Oct. 28 letter to Congress about a renewed investigation of Clinton emails. Immediately afterwards, there was a 17-point drop in net sentiment for Clinton, and an 11-point rise for Trump, enough for the two candidates to switch places in the rankings, with Clinton in more negative territory than Trump. At a time when opinion polling showed perhaps a 2-point decline in the margin for Clinton, this conversation data suggests a 28-point change in the word of mouth “standings.” The change in word of mouth favorability metric was stunning, and much greater than the traditional opinion polling revealed.

Of course, a picture is worth a thousand words: 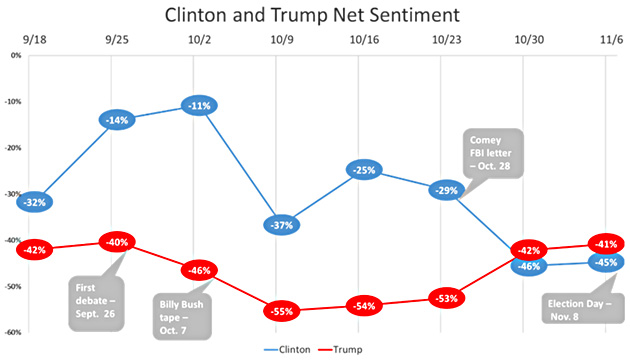 In late October, Clinton leads Trump by 24 points in the Engagement Labs survey. Two days after the Comey letter is released, Trump is ahead by 4 points. Trump kept that lead until Election Day.

Once again: Clinton did nothing particularly wrong in her campaign. She didn’t ignore working-class whites. She wasn’t too cautious on policy. She didn’t overestimate the impact of educated voters. She wasn’t complacent. What happened was simple: 12 days before the election, the FBI director released a letter saying he had found a brand-new trove of emails and implying that this might finally be the smoking gun about her private email server. That’s it.