The folks at EBRI have published the results of the 27th annual Retirement Confidence Survey, and once again it shows a puzzling disconnect between workers—who are relatively pessimistic about retirement—and actual retirees. Here’s an example: 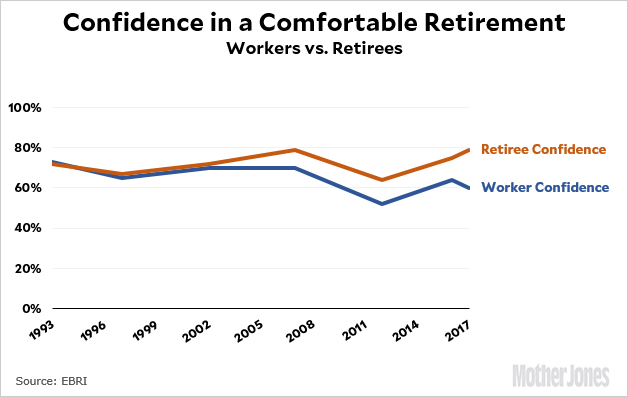 Generally speaking, workers are a lot more nervous about retirement than actual retirees. What’s even more interesting, the disconnect began in the early aughts, when the economy was still booming. Since then, the gap has continued to grow. The 2017 results are only one data point, but they show a gap of 19 percentage points. What’s going on? Why are workers so nervous, while actual retirees are reporting increased confidence? 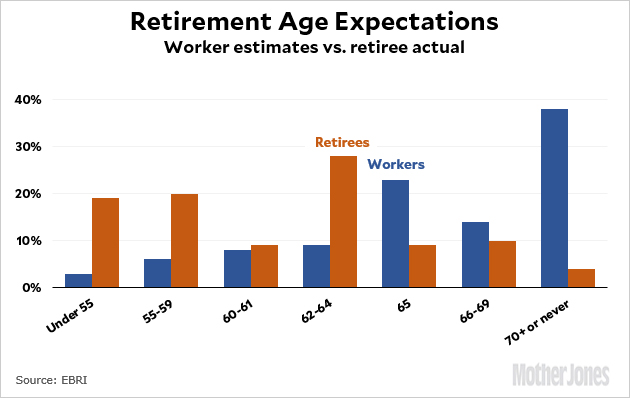 Workers are apparently convinced that they’ll never retire young and will most likely have to work forever. Actual retirees tell a much different story: 39 percent retired before age 60 and only 4 percent kept working after age 70.

I know it’s fashionable to talk about how screwed Xers and millennials are, and how 401(k)s have wrecked retirement. But the data just flatly doesn’t back this up. Millennials earn incomes that are pretty similar to boomers, and 401(k)s have turned out to be comparable to old-style pensions. It’s true that the Social Security retirement age has increased, which might account for some of the difference in expected retirement age, but only in the 65-69 age band.

Actual retirees have a message for us: things aren’t so bad. In reality, the vast majority of them retired by age 65 and the vast majority say they’re financially comfortable. It’s likely to be pretty much the same for today’s workers.