Our acronym for the day is EHB, which stands for Essential Health Benefits. These are things which every health care plan is required to cover, and Obamacare spells out ten of them:

The Republican health care bill is still having trouble getting enough votes to pass, so Paul Ryan is thinking about placating conservatives by repealing all of these EHBs. This means that a health insurer could literally sell you a policy that didn’t cover doctor visits, hospital visits, ER visits, your children’s health care, or prescription drugs—and still be perfectly legal. Here’s a rough estimate of how much we spend nationally on each of these categories of EHB: 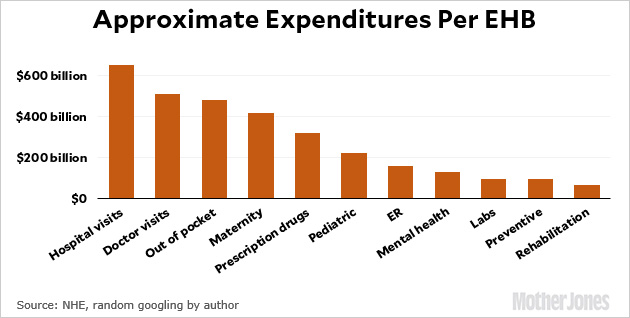 There are many problems with repealing Obamacare’s minimum required benefits, but I’d like to list just three:

This is all pretty straightforward stuff, and it’s hard to believe that Ryan would go down this catastrophic road. Enough’s enough. If I had to guess—and we might well know the answer before I wake up on Thursday—I’d say that Ryan tries to buy off the conservatives by taking maternity benefits off the EHB list and leaving everything else alone. After all, it’s maternity care that really seems to be a burr in the ass of the Freedom Caucus folks.

Why? Because they’re knuckle-draggers. It’s hard to put it any other way. They figure that being pregnant is solely a woman’s responsibility and there’s no reason men should have to help pay for it. Really. I’m not joking. What can you even say to people so terminally dimwitted?