It tuns out that one of features of my new camera is the ability to control it remotely with my cell phone. If you have even a gram of nerd blood in you, this should make you insanely jealous.1 It’s the coolest thing ever.

And yet, as cool as it is, it still left me twiddling my neurons trying to figure out what I could do with it. One possibility was situations where I need to minimize camera shake. Put the camera on a tripod and then snap the shutter remotely without actually touching anything. But that would be just another example of using a thousand dollars worth of technology to do what a ten-dollar cable release can do. Not that there’s anything wrong with that.

Then Marian suggested I could set up the camera by our hummingbird feeder and wait for hummingbirds to fly in. So I did. Here’s what the setup looks like: 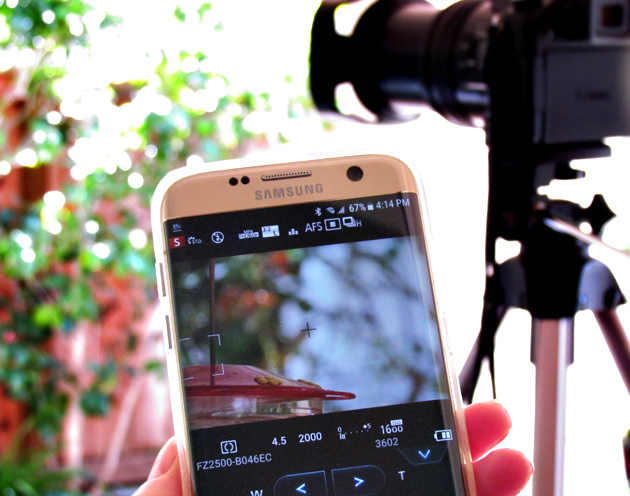 Then I went into the living room and watched Roger Federer play Stan Wawrinka at Indian Wells. Every time a bird showed up on my camera, I held down the remote shutter button and shot off a few dozen pictures.

Which did me precious little good. Damn, those little buggers are fast. Even with the shutter speed allegedly set at 1/2000th of a second, the pictures were blurry. Also out of focus most of the time, which was a combination of my fault and the camera’s fault. Still, live and learn. Here are the two best shots I got:

Anyway, I’ll have to try this again. It’s certainly a way of getting some good nature shots without sitting on my hump for hours on end in a muddy patch of dirt. Then again, since the WiFi range for the camera is about ten feet or so, maybe it just means I get a little better selection of where to sit on my hump for hours on end. I’ll have to think of some way to try this with the cats.

1Unless you already have a camera that can do this.