Daniel Mügge and Lukas Linsi had a pretty interesting chart in the Washington Post yesterday. Here it is: 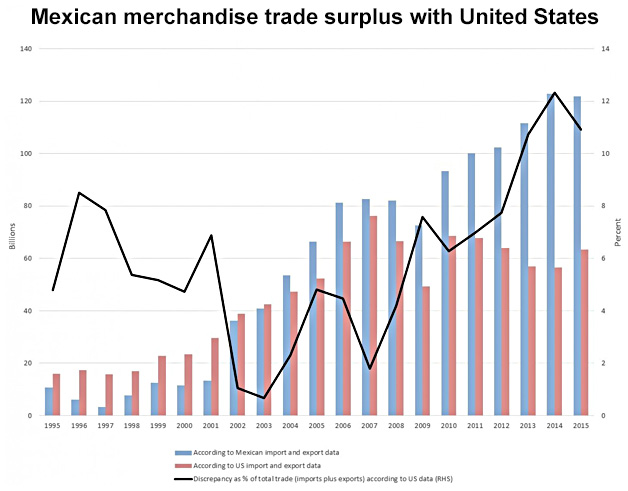 According to the United States, our trade deficit with Mexico is $63 billion and steady. According to Mexico, it’s $122 billion and climbing. That’s quite a discrepancy.

The weirdest part of this is that apparently no one quite knows what’s going on. The discrepancy in the official figures was fairly modest until 2007, but since then it’s widened considerably. The US and Mexico disagree about the correct figure by a factor of two these days.

The authors go through a few possible explanations, but none of them really do the job. They also note that this kind of discrepancy is common, though the US-Mexico disagreement is larger than most. Our trade deficit with China, for example, is either $388 billion (US figures) or $260 billion (Chinese figures). Other country pairs show the same discrepancies.

There’s no real lesson to take from this since we don’t know the cause. The authors suggest only that you take official trade figures with a grain of salt. They’re not quite as precise as you might hope.