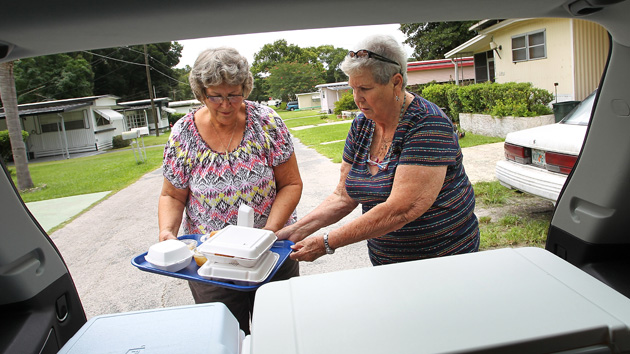 Today was the great Meals on Wheels debacle. Politico’s framing was typical:

Mulvaney: Proposed cuts to Meals on Wheels are compassionate to taxpayers

White House budget chief Mick Mulvaney on Thursday defended the Trump administration’s proposed deep cuts to social welfare programs….“Meals on Wheels sounds great,” Mulvaney said during the White House news briefing, adding that “we’re not going to spend [money] on programs that cannot show that they actually deliver the promises that we’ve made to people.”

This take quickly went viral. But Meals on Wheels is a program that delivers hot and cold meals to elderly people who can’t get out of the house. Did Mulvaney really say that he was showing compassion by cutting a tiny part of the federal budget for a program that helps feed the elderly? If you were writing a satire designed to show that Republicans were all heartless bastards, you still wouldn’t invent something like that. It would be too ridiculous to work even as black humor.

I would hardly put anything beyond the Trump administration at this point, but hell, this is bad PR. They have too much animal shrewdness to do this even if they wanted to. And it turns out, they didn’t. Here’s what really happened:

Eliminates funding for the Community Development Block Grant program, a savings of $3 billion from the 2017 annualized CR level. The Federal Government has spent over $150 billion on this block grant since its inception in 1974, but the program is not well-targeted to the poorest populations and has not demonstrated results. The Budget devolves community and economic development activities to the State and local level, and redirects Federal resources to other activities.

Housing and Urban Development, and the Community Development Block Grants, aren’t exclusively about housing. They support a variety of different programs, including, in part, Meals on Wheels. In Austin Texas today, one organization there that delivers those meals to thousands of elderly, says that those citizens will no longer be able to be provided those meals. So what do you say to those American who are ultimately losing out?

As you know, Meals on Wheels is not a federal program. It’s part of the CDBGs, the block grants, that we give to the states. And there have been many states that have made the decision to use that money for Meals on Wheels.

Here’s what I can tell you about CDBGs, because that’s what we fund, is that we’ve spent $150 billion on those programs since the 1970s. The CDBGs have been identified as programs by the second Bush administration as ones that were just not showing any results. We can’t do that anymore. We can’t spend money on programs just because they sound good. And great, Meals on Wheels sounds great. Again, that’s a state decision to fund that particular program.

Note how far apart those two snippets are. A second reporter then followed up several minutes later, using Meals on Wheels as an example yet again, and asked if this was a “hard-hearted budget.” Mulvaney said no, he thought it was compassionate to stop taxing people to pay for programs that don’t work.

Mulvaney, obviously, wasn’t saying that Meals on Wheels doesn’t work. He was saying that CDBGs don’t work. Meals on Wheels might be great, but community grants aren’t, and he wants to eliminate them. But by smushing together three quotes delivered at three different points, it sounds like Mulvaney was gleefully killing off food for the elderly.

I’m no expert on community block grants. I don’t know if they’re a good idea or not. And God knows the Trump “skinny budget” is a disgraceful piece of work for the richest country on the planet. But spinning this as “Mulvaney guts Meals on Wheels” is pretty ridiculous. The vast majority of federal funding for Meals on Wheels—which comes via HHS’s Administration on Aging, not HUD’s CDBGs—remains intact. Someone managed to plant this idea with reporters, and more power to them. Good job! But reporters ought to be smart enough not to fall for it.