Here is today’s mystery map. Can you guess what it is? 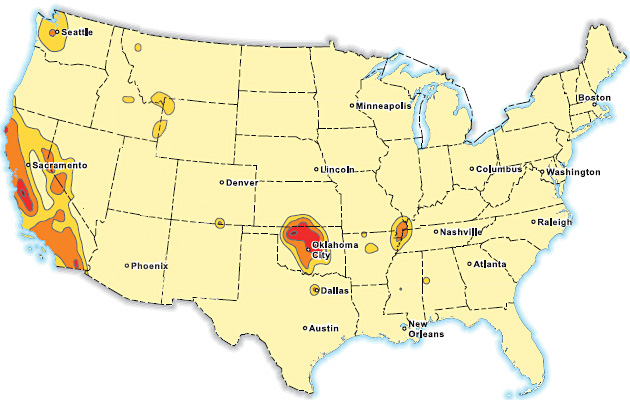 This map comes from a team of researchers writing in Seismological Research Letters, and it shows the 2017 earthquake risk in various parts of the country. You probably aren’t surprised to see either California or Seattle in dark orange. If you’re familiar with the New Madrid fault, you’re not surprised by the blotch on the border of Arkansas and Tennessee. But Oklahoma City?

Yep. It’s all because of fracking:

Most of the induced earthquake activity in the central and eastern United States (CEUS) is caused by deep wastewater disposal. Injected wastewater causes pressure changes that can weaken (unclamp) a fault and therefore bring it closer to failure. Seismicity rates in Oklahoma increased exponentially beginning in 2009.

That magnitude 5.8 earthquake in Pawnee is the largest ever recorded in Oklahoma. However, thanks partly to reduced demand for oil and partly to new regulations, the earthquake risk in Oklahoma has decreased a bit in the past year. For now, though, it’s still pretty high. I knew all about the seismic danger from fracking before I read this, but I didn’t realize that, for now anyway, Oklahoma City is literally as earthquake prone as San Francisco.