It’s been…weeks, at least, since I’ve mentioned lead and crime, and today I got two nice little anecdotes at once. The first is from lead researcher extraordinaire Rick Nevin, who directs our attention to this chart: 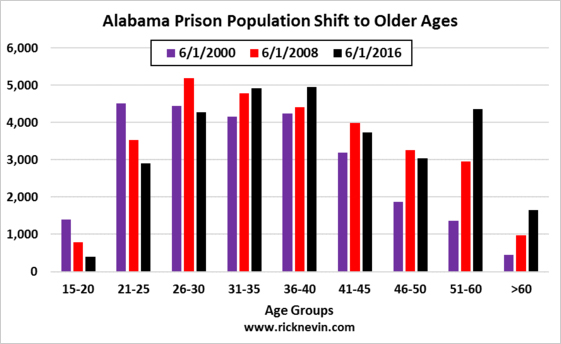 As predicted by the lead-crime theory, the prison population of younger cohorts (15-25) has dropped the most. The 26-30 cohort is flat, and the older cohorts are making up a bigger proportion of the total prison population. Why? Because everyone under 30 grew up in a fairly lead-free environment, so they’re less likely to commit serious crimes than similar cohorts in the past. 35-year-olds grew up at the tail end of the lead era, and are still moderately crime prone. Older cohorts were heavily lead poisoned as kids, and they’ve remained more crime prone even as they’ve grown older.

If you have a good memory, you may also recall a post I wrote four years ago explaining that lead poisoning affected blacks and Hispanics more than whites because they were more likely to grow up in dense urban environments with a lot of auto exhaust. Because of this, during the great crime wave of the 60s and 70s, their crime rates went up faster than white crime rates. The flip side of this is that with lead mostly gone, their crime rates are dropping faster than they are for whites. We can see this in the declining share of the jail population made up by blacks and Hispanics. Keith Humphreys shows us the mirror image of this, the rising share of the jail population made up by whites: 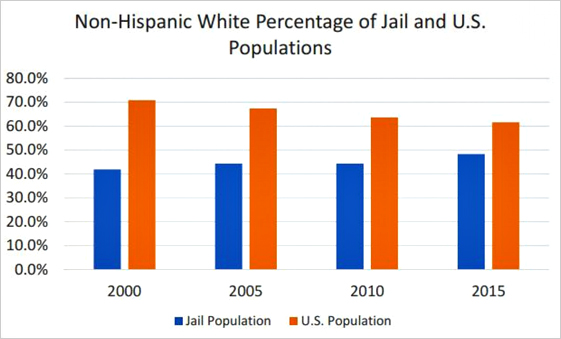