Erin McPike was the only journalist allowed to accompany Secretary of State Rex Tillerson on his recent trip to Asia. Dan Drezner points out this snippet from the profile of Tillerson that she filed:

After watching the contortions of my face as I tried to figure out what to say next, he humbly explained that he had never met the president before the election. As president-elect, Trump wanted to have a conversation with Tillerson “about the world” given what he gleaned from the complex global issues he dealt with as CEO of Exxon Mobil.

“When he asked me at the end of that conversation to be secretary of state, I was stunned.”

In other words, Trump had never met Tillerson before and knew nothing about him. Then, at the end of a single short conversation, he immediately offered him the job. I guess that shows how important Trump considers the Secretary of State. He had already interviewed a bunch of other people, he was tired of the whole thing, and people were on his case for not filling his cabinet. So he chatted with this Tillerson guy who had been sent his way and figured, sure, what the hell. He’ll do.

McPike also passes along this tidbit:

Tillerson is spending his early days in Foggy Bottom “whiteboarding,” a businessy term for mapping out and remapping out org charts, strategies, and plans. And that’s one area where he believes he can make an impact.

Maybe I’m a little hypersensitive about this, but it sets off my alarms. I’ve always thought that big reorgs were the last refuge of weak business leaders who couldn’t think of anything else to do but wanted to look like they were doing CEO-ish things. But even if I’m being too harsh about this, doing it as your first course of action before you even settle in and learn anything about the organization you’re heading is definitely dumb. Nor is this the only evidence we have that Tillerson was not a great business leader: 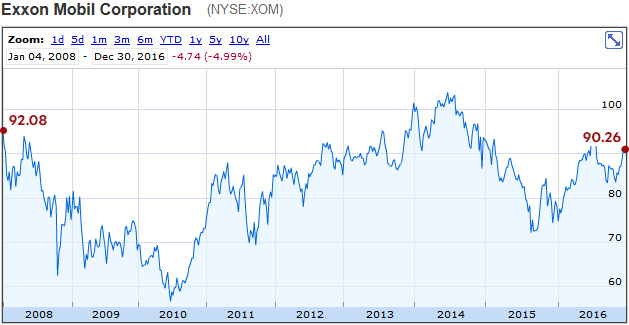 Nine years is a long time to go without any improvement in your stock price.