I was reading through the Republican health care bill last night, and it struck me that a lot of longtime Republican hobbyhorses are missing. This is a tentative guess on my part, since big chunks of the bill look like this: 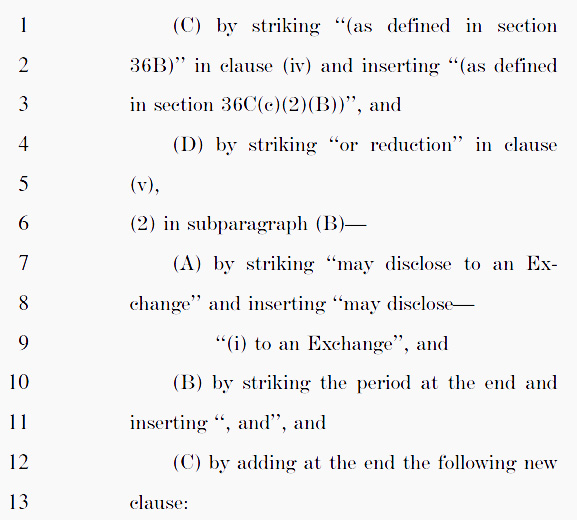 You can hide a lot in legalese like that, which is why it pays to have experts pore through the text of a bill looking for Easter eggs. That said, I’m pretty sure the bill doesn’t include any of the following:

Why is this? If you look carefully, you’ll see what these things all have in common: they don’t directly affect the federal budget, which means they can’t be passed via reconciliation. They have to be passed in a separate bill under regular order, which means Democrats can filibuster them. Republicans don’t have 60 votes in the Senate to overcome a filibuster, so they can’t do any of this stuff.

Republicans can starve the subsidies to make Obamacare virtually useless for the poor, but they can’t repeal the entire law. The result of such a partial repeal is likely to be such obvious chaos that they’ll be lucky to get their bill passed in the House, let alone the Senate. There are bound to be at least three senators who just aren’t willing to clap loudly and pretend that everything is OK. It’s very hard to see a path to passage for this bill.

UPDATE: I originally said that Timothy Jost claimed the GOP health care bill eliminates Obamacare’s medical loss ratio. That was a misreading on my part. He was talking about the actuarial value of the various metal levels. Apologies. I’ve removed this from the text.