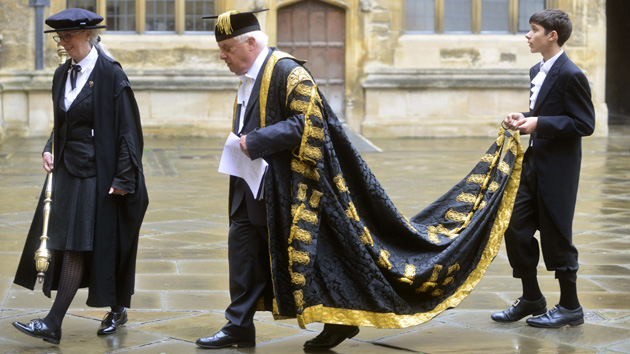 I'll bet the Rt Hon Chris Patten is required by his employment contract to use the Oxford comma.Brian Jordan/UPPA via ZUMA

Yesterday a reader sent me an email asking, “Is there a more ‘you’ story in the news right now than this”? The story in question was a court decision that hinged on a Maine law that lacked an Oxford comma, but I got busy with other stuff and never read it. So here it is:

What ensued in the United States Court of Appeals for the First Circuit, and in a 29-page court decision handed down on Monday, was an exercise in high-stakes grammar pedantry that could cost a dairy company in Portland, Me., an estimated $10 million.

….The debate over commas is often a pretty inconsequential one, but it was anything but for the truck drivers. Note the lack of Oxford comma — also known as the serial comma — in the following state law, which says overtime rules do not apply to:

Shockingly, this lack of an Oxford comma wasn’t just sloppiness. Apparently the Maine Legislative Drafting Manual is very clear that Oxford commas shouldn’t be used except in rare cases. What idiots! If there’s anyplace in the world that ought to embrace the Oxford comma, it’s the legislative process. Legislation is mostly impenetrable anyway, so even if you think the Oxford comma is ugly, who cares?

In any case, I’d like to point out that a surprising number of court cases hinge on “grammar pedantry.” Or syntax pedantry or dictionary pedantry or various other kinds of linguistic pedantry. Is a “penalty” enforced through the tax code a fine, which would be illegal, or a tax, which would be legal? One Supreme Court justice changed his mind on this crucial question in 2012, and saved Obamacare. Millions of people now have health insurance because of linguistic pedantry.

And before you ask, I am pleased to report that Mother Jones officially endorses the Oxford comma in its style guide. Everyone else should too.