A few years ago I switched to T-Mobile. The price was good, and their plans included tethering at no extra cost. I mostly use my phone as a mobile hotspot with only occasional forays into text, talk, and apps, so this was a good deal.

A few weeks ago Marian switched over too. When we did that, we also switched to their unlimited data plan. We didn’t really need it, but it was only a few dollars more than our old plan, so why not?

Well, ever since then my hotspot performance has been lousy. At first I paid no attention. Sometimes this stuff happens. But it went on and on, and eventually I wondered if I had missed something. It turns out I had: the unlimited plan includes unlimited 4G except for the hotspot. Here’s the fine print: “Tethering at Max 3G speeds.” That’s bad enough, but in practice it seems to mean “3G except when we don’t feel like it,” since about half the time my hotspot performance reminds me of using a dial-up modem back in the 80s. Why? Because I didn’t read the fine print to the fine print: “Smartphone and tablet usage is prioritized over Mobile Hotspot Service (tethering) usage.” 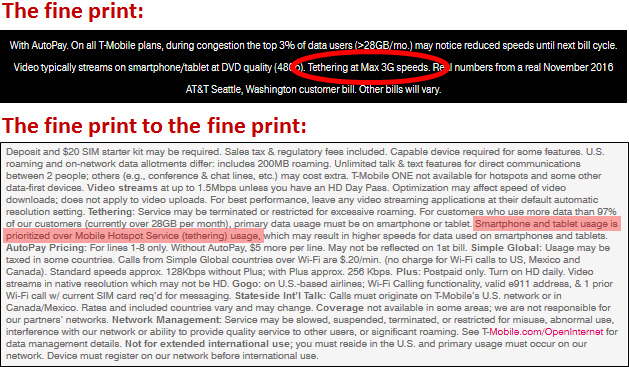 As you can see, it’s all right there in the description of the plan. How could I have missed it? It’s plain as day if only I’d looked at it with a magnifying glass or the sales rep had pointed it out. But I didn’t and he didn’t. So now I’m stuck paying more for a plan that delivers less of what I actually want. And why did T-Mobile do this? Because they now have a new product: for $20 per month, you can get 4G hotspot performance. Fabulous.

I’m so tired of this shit. It seems like it applies to practically everything I buy these days. There’s always something.