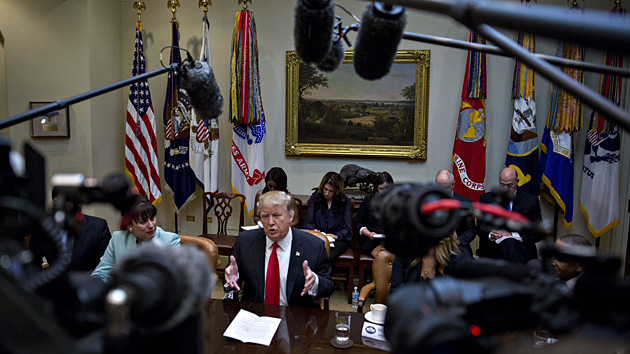 While Mr. Obama liked policy option papers that were three to six single-spaced pages, council staff members are now being told to keep papers to a single page, with lots of graphics and maps. “The president likes maps,” one official said.

One page with lots of graphics and maps? Is there room for any words at all? Hell, even comic books have words. We also learn this:

Two people with direct access to the White House leadership said Mr. Flynn was surprised to learn that the State Department and Congress play a pivotal role in foreign arms sales and technology transfers. So it was a rude discovery that Mr. Trump could not simply order the Pentagon to send more weapons to Saudi Arabia — which is clamoring to have an Obama administration ban on the sale of cluster bombs and precision-guided weapons lifted — or to deliver bigger weapons packages to the United Arab Emirates.

Congress keeps getting in his way! But I guess that’s not going to last long. Here is Stephen Miller on Face the Nation, where John Dickerson asked him about yet another branch of government that’s been getting in Trump’s way:

We have a judiciary that has taken far too much power and become in many cases a supreme branch of government….The idea that you have a judge in Seattle say that a foreign national living in Libya has an effective right to enter the United States is beyond anything we’ve ever seen before.

The end result of this, though, is that our opponents, the media and the whole world will soon see as we begin to take further actions, that the powers of the president to protect our country are very substantial and will not be questioned.

MILLER: So you saw the president following through on exactly what he said he would. He went out last night in front of the TV cameras and stood shoulder to shoulder with the prime minister of Japan and sent a message to the whole world that we stand with our allies….

DICKERSON: So no other show of strength in terms of military —

MILLER: That show last night was a show of strength, saying that we stand with our ally. Having the two men appear on camera worldwide to all of planet earth was a statement that will be understood very well by North Korea.

That’s…not so tough. In political movies, the final act often has the president going in front of the cameras and saying something strong and resolute—which somehow makes the opposition melt away. I guess Miller and Trump believe this is how the real world works too. Merely appearing on camera is a show of strength that will surely stop these North Korean tests in their tracks.

Then again, Trump has warned us many times that he doesn’t like to signal military action before it happens. Maybe he’s planning to lob a nuke at Pyongyang on Monday. Can anyone say for sure that he won’t?