The White House is like a rotten onion these days: every time we peel back a layer, it smells worse and worse. First we all heard about Steve Bannon, the Breitbart News CEO who plays the Rasputin role in the West Wing, whispering in Donald Trump’s ear about Muslim terrorists and Mexican rapists. Then we all learned about Stephen Miller, the 31-year-old wunderkind who is, if anything, even more glib and hardcore than Bannon. Now we’re all learning about Sebastian Gorka:

For years, Gorka had labored on the fringes of Washington and the far edge of acceptable debate as defined by the city’s Republican and Democratic foreign policy elite. Today, the former national security editor for the conservative Breitbart News outlet occupies a senior job in the White House and his controversial ideas — especially about Islam — drive Trump’s populist approach to counterterrorism and national security.

….For him, the terrorism problem has nothing to do with repression, alienation, torture, tribalism, poverty, or America’s foreign policy blunders and a messy and complex Middle East. “This is the famous approach that says it is all so nuanced and complicated,” Gorka said in an interview. “This is what I completely jettison.”

For him, the terror threat is rooted in Islam and “martial” parts of the Koran that he says predispose some Muslims to acts of terror. “Anybody who downplays the role of religious ideology . . . they are deleting reality to fit their own world,” he said.

Last month, as he celebrated at the inaugural ball…Gorka said he had one last message for America’s troops — “the guys inside the machine” — and its enemies. He turned toward the host, his medal glinting in the TV lights. “The alpha males are back,” he said.

It’s a sewer in there. But here’s the funny thing: Gorka might well be right but for entirely the wrong reasons. Young men who live in a wide swath of the world stretching from North Africa to Central Asia probably are more prone to violence than they are in the developed North. But it has nothing to do with Islam. That’s just the handiest thing to latch onto. It’s all about lead: 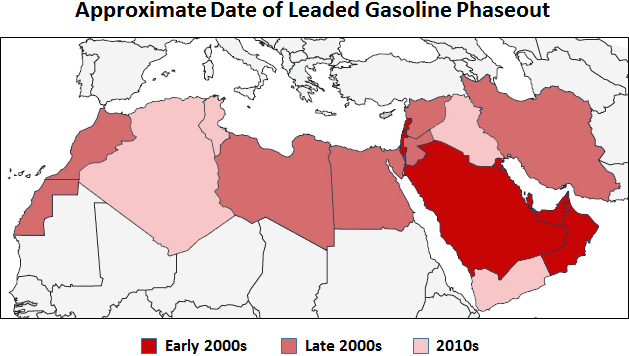 The Trumpies got struck down for temporarily banning immigration from a set of seven seemingly arbitrary countries, so instead they should create a rule that temporarily bans immigration from any country that phased out leaded gasoline later than, say, 2001. They might have to fiddle a bit with the numbers, which they have plenty of experience doing, and maybe add some weird second condition in order to get only the countries they want, but with a little creativity they could make it work. And it’s not based on ethnicity, religion, or even nationality. You’re welcome!