Defense Secretary James Mattis is tired of European allies not carrying their weight in NATO:

Echoing President Donald Trump’s demands for NATO countries to assume greater self-defense responsibility, Mattis said Washington will “moderate its commitment” to the alliance if countries fail to fall in line. He didn’t offer details, but the pressure is sure to be felt, particularly by governments in Europe’s eastern reaches that feel threatened by Russian expansionism.

This is one of the few Trump policies that I mostly agree with. Of course, so has every president for the past two decades, both Republicans and Democrats. It’s pretty easy to see why. NATO countries are supposed to spend at least 2 percent of GDP on defense, but only five of them actually do: 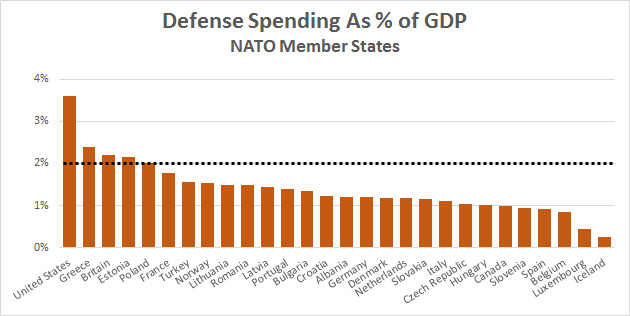 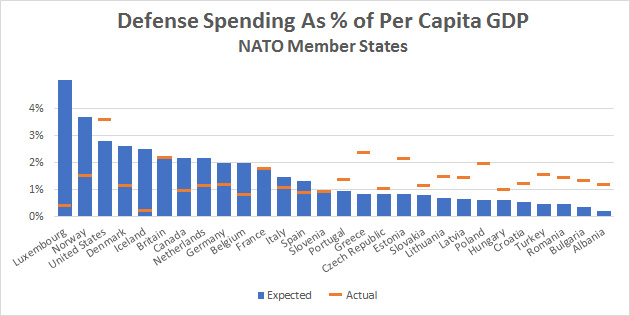 There are still plenty of slackers, but they’re different slackers. Most of NATO’s poor countries are spending more than we should expect of them, while most of the rich countries are not even close to pulling their weight. Luxembourg is a basket case.1 The Nordic countries are seriously underspending. Portugal and France are doing OK, but the core European countries of Germany, the Netherlands, and Belgium are way under target.

I don’t know what Mattis has in mind, but I assume he’s suggesting that if Europe doesn’t start spending more, we’ll close some bases and reduce our overall footprint there. This is a tricky threat, though, since in most cases we want those bases as much or more than the host countries do. And domestic politics makes it all but impossible for most rich European countries to substantially increase defense spending anyway. Is there really any chance that Germany is going to double its defense budget anytime soon?

I’m curious to find out if this is just another in the dreary succession of US defense chiefs begging Europe to spend more, or if Mattis has real plans to make his threat stick. Stay tuned.

1I know: who cares, really? And anyway, what leverage do we have? If Russian tanks come storming through the Fulda Gap and manage to plow through Germany, it’s not as if we’re going to repel them everywhere else but let them into Luxembourg. Still, being a tax haven shouldn’t be a free lunch. It makes you rich, but that also means you should be expected to contribute more to the common defense.