Amino is a health care startup dedicated to “making health care simple and intuitive using data, design, and a whole lot of empathy.” Yesterday they posted the following map: 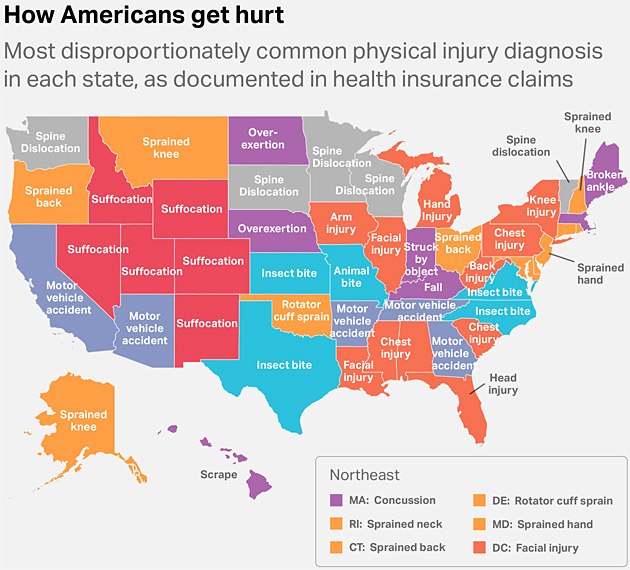 This is not the most common form of injury, which is “bruising” or “open wound” in nearly every state. It’s the type of injury that each state has in unusually high numbers compared to other states. California, for example, has lots of motor vehicle accidents, which should surprise no one. Likewise, Florida is a leader in head injuries, which is equally unsurprising.

But what’s up with the Rocky Mountain suffocation belt? Amino’s Olivia Marcus explains:

Some broad trends stand out, including the prevalence of “suffocation” (a broad category related to oxygen deficiency) in six of the eight Mountain states: Nevada, Idaho, Utah, Wyoming, Colorado, and New Mexico. Diagnoses related to “suffocation” were 1.8 times more common in Idaho compared to the national distribution, and 3.1 times more common in Utah. The other four states fell somewhere in the middle.

We can’t say for sure why this is. But the vast majority of “suffocation” diagnoses were for hypoxemia, the medical term for low blood oxygen. Interestingly, hypoxemia can be caused by exertion at high altitudes, where oxygen is scarce. We can’t prove that this is correlated to the altitude of Mountain states, but it could be related.

OK, so all those Mountain Staters aren’t being suffocated in their beds or anything. They’re just suffering from temporary oxygen deficiency. And those six states are indeed the ones with the highest mean elevation in America:

So yeah: exertion at high altitudes appears to be the culprit here. I guess they call them Mountain States for a reason.