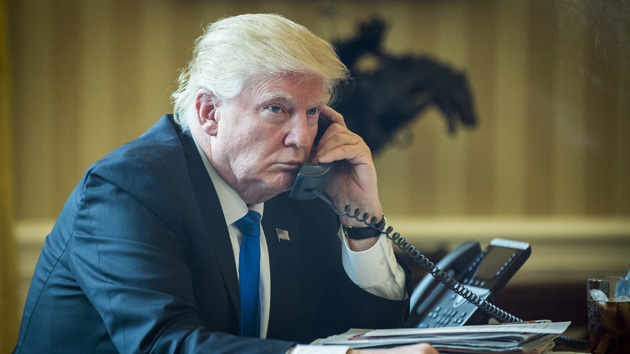 “You have a bunch of bad hombres down there,” Trump told Pena Nieto, according to the excerpt given to AP. “You aren’t doing enough to stop them. I think your military is scared. Our military isn’t, so I just might send them down to take care of it.“

Oh please. We’re supposed to believe that Trump threatened to invade Mexico? We all know that Trump is a bit of a hothead, but even he wouldn’t lose his shit like this with the leader of a close ally during a—

Wait. What’s this about Trump’s call on Saturday with the Australian prime minister?

President Trump blasted Australian Prime Minister Malcolm Turnbull over a refu­gee agreement and boasted about the magnitude of his electoral college win, according to senior U.S. officials briefed on the Saturday exchange. Then, 25 minutes into what was expected to be an hour-long call, Trump abruptly ended it.

….“This is the worst deal ever,” Trump fumed as Turnbull attempted to confirm that the United States would honor its pledge to take in 1,250 refugees from an Australian detention center. Trump, who one day earlier had signed an executive order temporarily barring the admissions of refugees, complained that he was “going to get killed” politically and accused Australia of seeking to export the “next Boston bombers.”

U.S. officials said that Trump has behaved similarly in conversations with leaders of other countries, including Mexico.

Trump hung up on the prime minister of Australia, one of our oldest, closest, and most reliable allies? I don’t have the words. In any case, that’s the leaders of Mexico, Australia, and “other countries” that Trump has apparently insulted on phone calls. I wonder what the body count really is. How many foreign leaders has Trump yelled at so far?

How about Vladimir Putin? Apparently not. In fact, Republicans in Congress are rushing to do a big favor for oil companies that do business in Russia. It all has to do with Section 1504 of the Dodd-Frank financial reform bill, which requires drilling and mining companies to disclose any payments they make to foreign governments. Back in 2010, ExxonMobil CEO Rex Tillerson—now our Secretary of State—opposed this provision. Here is Michael Grunwald in Politico:

Tillerson argued that forcing U.S. oil firms to reveal corporate secrets—such as paying foreign governments—would put them at a competitive disadvantage. He also explained that the provision would make it especially difficult for Exxon to do business in Russia, where, as he did not need to explain, the government takes a rather active interest in the oil industry.

Today, seven years later, Republicans confirmed Tillerson as President Trump’s Secretary of State, despite allegations that he’s too cozy with Russia. At the same time, the GOP is preparing to try to kill the disclosure rule created under Section 1504, despite warnings from international aid groups that the move would provide a wink-and-nod blessing to hidden corporate payments to petro-thugs.

This is likely to be the very first bill that Congress sends to Trump’s desk: a big wet kiss to oil companies and Vladimir Putin. It’s nice to know that we have our priorities straight.