What have they done with the real Kevin Drum?

In his own furious, snark-heavy post, Drum asserts that Conway didn’t make an honest mistake in her error-strewn recitation. “Do not for a second think that this wasn’t deliberate,” Drum says.

….It’s plain that Conway made several misstatements on Hardball. Is it possible that her misstatements were made in some type of good faith? That she actually bungled the giant pile of index cards which are constantly fluttering around inside her grievance-fueled head? In our view, she may have known that she was misstating; it’s possible that she didn’t.

Somerby thinks we should be careful about using the word lie. I agree. Generally speaking, it’s always difficult to know if a falsehood is deliberate. That said, let’s review the evidence:

This is not 1999. Or 2000. Or 2008. Or even 2016. As the Washington Post’s Jenna Johnson said in a piece about Trump’s claim that 3-5 million illegal votes were cast last year—a piece that Somerby praised—”The voter fraud canard was just one in a rush of falsehoods that poured from Trump and his advisers during his first 10 days in office.” The Toronto Star counts 33 Trump falsehoods in his first 14 days. Even if you’re a little more forgiving than the Star, that’s a whole lot of falsehoods. And that’s just Trump. It doesn’t include Sean Spicer or Kellyanne Conway or anyone else in the White House. If you do include them, here is Politifact’s scorecard: 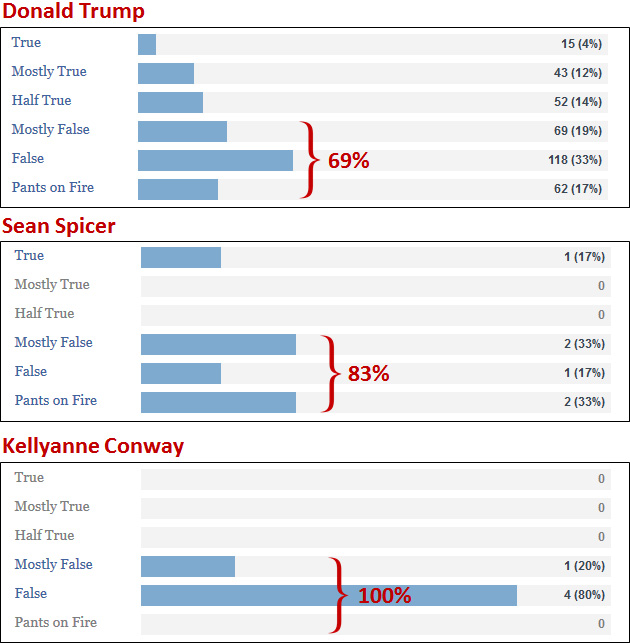 Kellyanne Conway doesn’t have the deep track record that her boss has amassed with Politifact, but what she lacks in quantity she’s making up for in quality. Of the statements of hers that Politifact has checked, not a single one was true. Not. A. Single. One.

So: did Conway lie about Bowling Green? I’d say the evidence is overwhelming that she did. Now, under normal circumstances maybe even overwhelming wouldn’t be quite enough. You’d need a smoking gun. But that standard doesn’t work for the Trump administration. They don’t just lie constantly, they repeat lies even after they know beyond a shadow of a doubt that they’re lies. They lie to your face in the most insulting possible way, as Spicer did in his infamous performance on January 21 about the crowds at Trump’s inauguration. At some point, the falsehoods come so thick and fast that you have to conclude they’re deliberate.

We’ve easily reached that point. You simply can’t cover the Trump administration accurately unless you assume that most of their falsehoods are intentional. How much evidence do you need, after all? It’s a new era, folks.