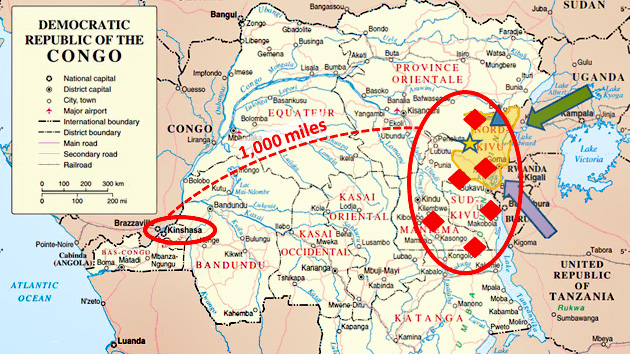 The Democratic Republic of the Congo is one of the most war-torn places on earth. Much of the money to keep the war going comes from mining operations in the eastern part of the country that are effectively controlled not by the distant central government, but by militias and warlords that enslave workers and smuggle ore out through the DRC’s eastern border. In an effort to cut off their source of funding, the Dodd-Frank financial reform bill includes a provision that discourages companies from buying the so-called 3TG metals (tin, tantalum, tungsten, gold) from conflict areas. So how has that worked out?

That depends on who you ask, of course. But a surprising number of neutral and lefty sources think the policy has been a failure. For example, here is Lauren Wolfe of Women Under Siege:

Barnard College political science professor Séverine Autesserre has…estimated that only 8 percent of the country’s ongoing conflict has anything to do with natural resources. Moreover, in the September 2014 letter, the signatories noted that “armed groups are not dependent on mineral revenue for their existence.” Many groups can easily turn from minerals to palm oil, charcoal, timber, or cannabis to make money — not to mention extortion, illegal taxes, and other means.

….When Dodd-Frank passed, Congolese President Joseph Kabila put a ban on all mining and mineral exports in North and South Kivu and Maniema provinces. Though the ban was officially lifted in 2011…its ripple effects have persisted: Many artisanal mines have remained closed, and countless livelihoods have been destroyed, according to academics and activists. [Laura] Seay estimated in 2012 that between five and 12 million Congolese had been “inadvertently and directly negatively affected” by the loss of employment created by the ban and its aftershocks.

Here is the conclusion of a study by Dominic Parker and Bryan Vadheim:

Using geo-referenced data, we find the legislation increased looting of civilians, and shifted militia battles towards unregulated gold mining territories. These findings are a cautionary tale about the possible unintended consequences of imposing boycotts, trade embargoes, and resource certification schemes on war-torn regions.

The GAO says that most Western companies have no way of telling whether the minerals they buy come from conflict zones:

Ben Radley, one of the researchers behind We Will Win Peace, a documentary about the brutal warfare in the eastern DRC, says he has learned to be cautious about well-meaning movements:

There are three shortcomings to the “conflict minerals” campaign that came out of this work. It misrepresents the causal drivers of rape and conflict in the eastern DRC. It assumes the dependence of armed groups on mineral revenue for their survival. It underestimates the importance of artisanal mining to employment, local economies and therefore, ironically, security.

….The relationship between advocacy organizations headquartered in Western cities and their marketed constituency of marginalized and disadvantaged African groups is…tenuous. One of the most striking elements during the making of the film was the difficulty of finding Congolese groups in rural and peri-urban areas who knew about and supported the “conflict minerals” campaign. This suggests a lack of engagement with the people who stand to be most directly affected by campaign outcomes.

There are, of course, lots of advocates who continue to favor the ban on conflict minerals. They say that one of the biggest militias in the conflict area has been put out of business by the ban, and that more progress can be made by strengthening the hold of the central government in the eastern DRC and tightening the programs designed to trace the source of minerals. For the most part, though, their evidence of success tends to be very anecdotal.

Beyond all this, there’s another reason it’s difficult to know for sure what the ban is and isn’t responsible for. The UN has been spending a billion dollars a year on peacekeeping operations in the conflict area for over a decade, and it’s all but impossible to know how much of the recent success—if success there’s been—is due to the Dodd-Frank ban and how much is due to the UN.

Bottom line: it’s not easy to know whether the conflict mineral ban—which Europe joined in 2015—has been successful. The whole issue is also highly politicized, since large corporations that buy 3TG minerals have fought against the ban since the start.

Why bring this up now? Because a leaked memo suggests that President Trump plans to sign a memorandum suspending the conflict mineral ban for two years. I don’t know if that’s a good idea or not. However, I sure wish I had more confidence that it wasn’t just a bit of payback to companies like Intel, which have lobbied for a long time to get the ban rescinded. Trump is hoping that these companies will play ball with his continued PR campaign to take credit for every new factory built in America—as Intel did today—and this sure seems like the kind of reward that will help keep his gong show going.