Every year, Edge.org asks scientists a question. This year it’s “What scientific term or concept ought to be more widely known?” Various worthies proposed things like neurodiversity, regression to the mean, Bayes’ theorem, matter, and—

Wait. Matter? That’s pretty widely known already, isn’t it? Sure, but Hans Halvorson doesn’t think most of us really get matter. Fair enough, and in that spirit I offer up my concept: gravity.

The truth is that I’m twisting the spirit of the question to gripe about one of my pet peeves. What I really want is a permanent ban on the infamous trampoline picture used to illustrate how Einstein’s General Theory of Relativity explains gravity. Here’s an example: 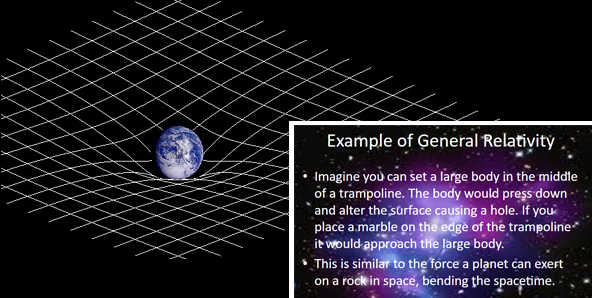 The idea here is that the trampoline illustrates the concept of warped spacetime, and it’s adequate for that purpose. But if you place a stationary marble on the trampoline in the picture, what causes it to suddenly start rolling toward Earth? This only makes sense if there’s some kind of secret gravity machine underneath the trampoline that pulls on the marble. This is not just oversimplified, as complex concepts often are in works for general audiences, it’s flatly wrong. But even notable scientists continue to use this metaphor in books on relativity.

So how does relativity explain gravity? The weird thing about the trampoline metaphor is not just that it’s wrong, but that the correct explanation is both easier to understand and way more interesting. Here’s what you need to know: all objects in the universe are in motion. Even a seemingly stationary object is moving through time at a rate of one second per second. However, in the presence of a large mass (like the earth or the sun), spacetime is warped very slightly. For any object near a large mass, this warpage causes time to slow down, and this slowdown is converted into motion through space.

In a slightly more formal sense, we can say that neither intervals in space nor intervals in time are constant under all conditions, but the spacetime interval is. However, in order for that interval to stay constant, motion through space has to increase (i.e., objects speed up) whenever motion through time is reduced (i.e., time slows down).

The equation that describes this includes the term c2 (the speed of light squared), which is a huge number. In the famous equation e=mc2, it explains why a tiny amount of mass produces a huge amount of energy in an atomic explosion. In general relativity, it explains why a very tiny change in motion through time gets converted into a pretty large change in motion through space.

Now, in addition to being correct, isn’t that more interesting? In the presence of mass, time slows down slightly, and this slowdown is converted into spatial motion toward the mass. That motion is gravity. And because spacetime is warped only slightly by mass, gravity is a very weak force compared to all the other forces we know about. Better than anything else, this gets across the idea that space and time aren’t truly separate entities any more than length and breadth are separate entities. They are merely components of the broader concept of spacetime.

So here’s what I think more people should know: how gravity actually works. And here’s my New Year’s resolution for other people: knock it off with the trampoline. You can find other ways of illustrating the warpage of spacetime, and it causes nothing but confusion when you (incorrectly) use it to explain gravity.