The New York Times has called one of President Trump’s lies a lie. The word isn’t used in the text of the story, but it is used in the headline: 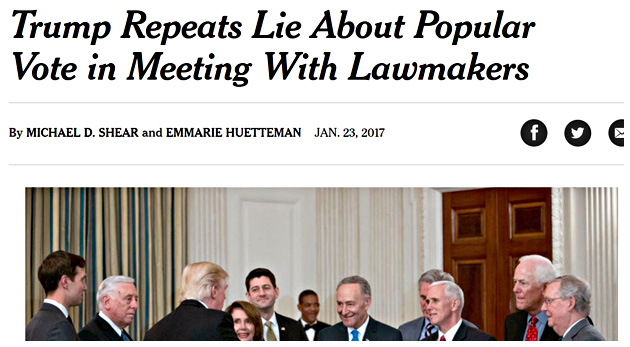 In this case, Trump said that between three million and five million illegal immigrants voted for Hillary Clinton, and he would have won the popular vote if not for that. Why was that judged a lie? Presumably because Trump has said it before, and it’s been widely exposed as flatly untrue. Trump surely knows this, which means he’s telling a knowing falsehood, aka a lie.

This is a reasonable metric. The problem with branding something a lie is that you have to be sure the speaker knew it was wrong. Otherwise it’s just ignorance or a mistake. But in Trump’s case, it’s often clear that he knows he’s lying. When he says the crowd at his inauguration was over a million, it’s clear that he has no basis for this. He’s just making up a number. When he says millions of illegal immigrants voted, he knows it’s false because a legion of reporters have told him it’s false. When he says the unemployment rate is 42 percent, it might be a mistake the first time. But the tenth time? It’s a deliberate lie.

Beyond this, I’ll repeat a three-part test I offered a few years ago that I find useful for judging how deceptive a statement is:

Click the link to find out why I think this test is useful. The nickel version is that it’s a check on my emotional response. When I go through these three steps, sometimes I find things worse than I thought and other times I find them more benign. Give it a try.

UPDATE: Here’s an interesting little nugget about the evolution of the Times headline: