Here is the president-elect of the United States on the last day of the old year, offering his skepticism that Russia was behind the hacks of the DNC and other political organizations during the election:

“I just want them to be sure because it’s a pretty serious charge,” Mr. Trump said of the intelligence agencies….He added: “And I know a lot about hacking. And hacking is a very hard thing to prove. So it could be somebody else. And I also know things that 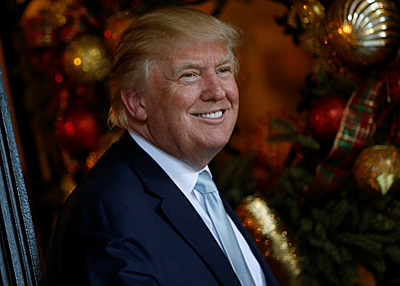 other people don’t know, and so they cannot be sure of the situation.”

When asked what he knew that others did not, Mr. Trump demurred, saying only, “You’ll find out on Tuesday or Wednesday.”

Here’s what I think Donald Trump knows about hacking: nothing. In movies, the stereotypical hacking nerd can blow through any cyber defense in about 30 seconds of whirlwind typing. So this is what Trump believes: There are lots of 19-year-old kids who can type furiously for about 30 seconds and break into any computer in the world.

I don’t imagine anyone is going to argue with me about that, so let’s move on to Trump’s statement that he knows things “that other people don’t know.” Intriguing! What could that be?

Well, America’s intelligence agencies think Russia is behind the hacking, so Trump doesn’t have any secret knowledge from them. Where else could he have gotten it? There are two obvious possibilities. The first is that Trump’s team did it, and he’s going to confess on Tuesday (or Wednesday). Wouldn’t that be great? The second possibility is that Putin has provided Trump with some kind of plausible misdirection, which he’s going to parrot on Tuesday (or Wednesday).

Actually, of course, there’s a third possibility, and it’s the most likely of all: Trump is just blathering as usual, and he will provide no new information on either Tuesday or Wednesday. He’s just playing the press the way he always does, and we’ll all turn out for the show, just like we did for the birther show in September.

We’ve got at least four years and 20 days of this stuff still ahead of us, folks. Take a deep breath.