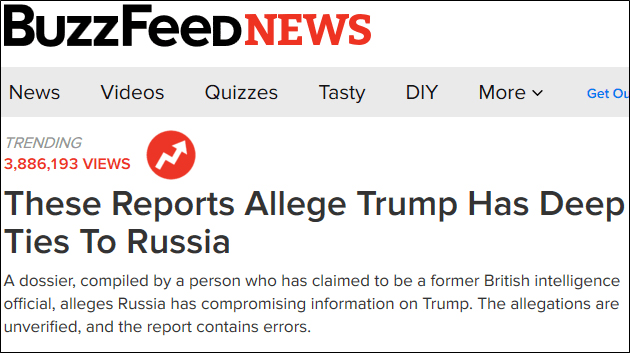 Last night, BuzzFeed decided to publish a dossier of raw intelligence put together by a British former MI6 officer. Like most reports of this kind, it contains lots of tittle-tattle, and there’s a good chance that much of it is untrue. So should BuzzFeed have published? Washington Post media columnist Margaret Sullivan makes the case against:

It’s never been acceptable to publish rumor and innuendo. And none of the circumstances surrounding this episode — not CNN’s story, not Trump’s dubious history with Russia, not the fact that the intelligence community made a report on it — should change that ethical rule.

Quite so, and virtually every mainstream media reporter seems to agree. And yet, I’m not so sure. Several things happened in the past couple of days that make this a trickier question:

What’s more, this dossier has apparently been seen or discussed by practically everyone in Washington DC. It has long annoyed me that things like this can circulate endlessly among the plugged-in, where it clearly informs their reporting unbeknownst to all the rest of us. At some point, the rest of us deserve to know what’s going on.

Put all that together—president, credibility among the intelligence community, and widespread dissemination—and I’m not at all sure that BuzzFeed did the wrong thing. Maybe this will all turn out to be the worst kind of made-up gossip, but at some point there’s enough reporting around it that it’s time to stop the tap dancing and let us know just what it is that has everyone so hot and bothered.