The Washington Post reports today on the latest harangue from those hardline, deficit-hating, no-compromise, tea-party Republicans:

In a dramatic reversal, many members of the hard-line House Freedom Caucus said Thursday they are prepared later this month to support a budget measure that would explode the deficit and increase the public debt to more than $29.1 trillion by 2026, figures contained in the budget resolution itself.

….“I just came to understand all the different ideas about where we go next,” said Rep. David Schweikert (R-Ariz.), a member of the House Freedom Caucus that typically opposes massive spending increases. Schweikert now says he will probably vote for the budget resolution.

Here’s the text of the budget resolution: 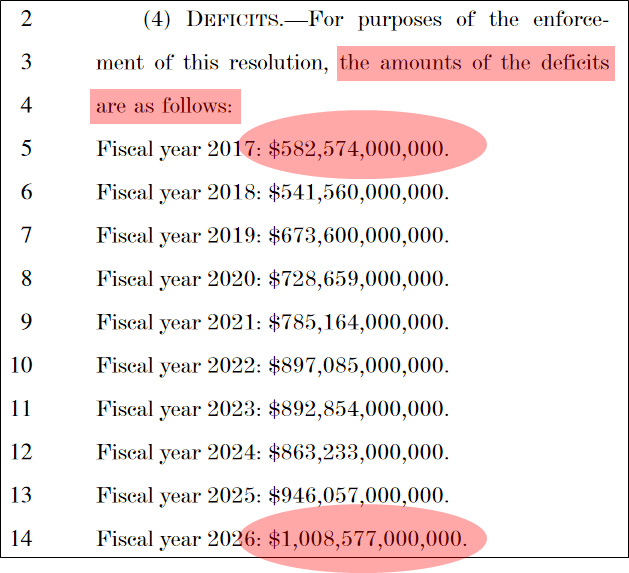 As always, Republicans only care about deficits when a Democrat is president. This time around they didn’t waste even two days before they made that crystal clear. I wonder how many times they can pull this bait-and-switch before the public and the press stops taking them seriously on their alleged horror of the spiraling national debt?

Republicans want to cut spending on the poor and cut taxes on the rich. That’s it. Deficits haven’t bothered them since the Reagan era. But I have to admit that this latest U-turn is pretty brazen even for them. It was only a few short months ago that they were swearing on a stack of Bibles that debt was eating our nation alive and they would never, ever vote for a budget that increased the deficit.

But it turns out there was an asterisk. If the deficit is produced by cutting Obamacare taxes on the rich and repealing Obamacare benefits for the poor, then it’s OK.