So let’s suppose that Donald Trump really does impose a 10 or 15 percent tariff on all goods entering the United States. Or maybe only Chinese and Mexican goods.1 What would happen? Who would be the winners and losers?

The simplest way to think about this is to remember what happens when tariffs are reduced. Textbook economics says that overall GDP will grow, prices will go down, but certain groups of people will be disproportionately harmed. So if tariffs are increased, the opposite should happen. Economic growth would suffer, prices would go up for most people, but certain groups would benefit. It’s not always clear what those groups are, but generally speaking workers in the sectors most vulnerable to 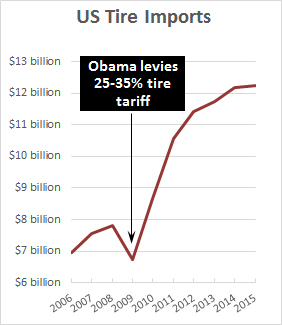 That’s the theory, anyway. The reality is sometimes different. Free traders, for example, often point to the example of automobile tires. In 2009, President Obama slapped a huge tariff on Chinese tires in order to protect the US tire industry. The chart on the right shows what happened: other countries rushed to fill the void and tire imports skyrocketed. The usual estimate is that about 1,200 jobs were saved at a cost to US consumers of $1.1 billion. That’s $900,000 per job, which is obviously a bad deal, but it’s also a diffuse deal. Unions and tire workers were happy regardless of how things turned out, while consumers probably barely noticed that they were paying an extra dollar per tire.

If Trump enacted a tariff only on China, this is roughly what would happen: some of China’s business would move to other countries, and net US imports would stay about the same. China would lose, other countries would gain, and in America it would be a wash.

But what if Trump enacted a 10-15 percent tariff across the board on every country? Economically, that would act like a sales tax on foreign goods. Prices would go up, which would allow American companies to increase production in sectors where a 10-15 percent advantage was enough to make them competitive.2 The exact way this would shake out depends on the elasticity of demand for various goods, but in the end American workers in certain sectors would almost certainly make gains, while all American consumers would pay higher prices. Is this tradeoff worth it? I’d say no, but plenty of people would disagree.

That’s the 100-thousand-foot view, anyway. In real life, other countries would almost certainly retaliate—maybe via tariffs of their own, maybe in other ways. Boeing, for example, usually suffers when the Chinese get annoyed with us, because Chinese airlines develop a sudden fondness for Airbus planes. Or the authorities in Beijing could make life harder for American companies doing business in China. Or they could get nasty in any of a dozen other ways. Ditto for the rest of the world, which would appeal to the WTO at best and retaliate with their own trade barriers at worst.

And no matter what the rest of the world did, American companies would face headaches for years as they tried to rework their supply chains, which are global for nearly every product you can think of. American products use lots of parts made overseas, and lots of overseas products use parts (and services) from America. For example, a San Francisco Fed paper estimates that 55 percent of the value of Chinese goods is actually US content. To make this concrete, think about iPhones: If China ends up making fewer iPhones, that also means fewer jobs for the Apple sales force and lower sales for the plant in Texas that makes iPhone processors. The whole thing is a mess—and it’s especially a mess if companies have no assurance about how long the tariffs will stay around or what’s around the corner from the rest of the world as they figure out ways to get back at us.

The bottom line is this:

Most likely, Trump’s tariffs would be a bad deal for nearly everyone, and maybe—maybe—a good deal for a few workers and CEOs in the sectors that have been hardest hit by foreign competition.

More generally, you can’t really talk about “trade” in the abstract. Basically, there’s China and there’s everyone else. China is our big problem, but the trouble with retaliating against China is that it’s too late. We have lost a lot of jobs to them, but the damage was mostly done years ago. By the time Obama took office there was little he could do, and 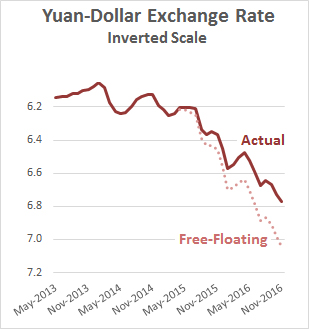 there’s even less that Trump can do now. It’s also true that China was a bad actor on the world economic stage for a long time. But again, their worst practices are mostly in the past. Their export subsidies are fairly low these days, and their currency manipulation is mostly to push the yuan up, not down. This benefits America, not China.

There is one best-case scenario, though: Trump threatens the Chinese and ends up getting some concessions from them without ever enacting any tariffs. Is that likely? I guess that depends on how good a negotiator you think Trump is. Unfortunately, his record in the business world doesn’t give much cause for optimism on that front.

1Yes, he could do it. Details here.

2For example, if China makes clocks for $2 and America makes clocks for $3, a 15 percent tariff wouldn’t do anything for American clockmakers. Even at a Chinese price of $2.30, Americans still couldn’t compete. However, consumers would end up paying $2.30 for clocks instead of $2.

On the other hand, if China makes cars for $9,000 and America makes cars for $10,000, a tariff could have a big effect. Chinese cars would now cost $10,350, and that means consumers would buy a lot more American cars. Unless, of course, they really prefer the Chinese cars even at a higher price. It all depends, you see.