After hinting around for weeks, president-elect Donald Trump finally released a detailed, 7-part (!) tweetstorm about his plans to reform America’s mercantile policy:

The U.S. is going to substantialy reduce taxes and regulations on businesses, but any business that leaves our country for another country, fires its employees, builds a new factory or plant in the other country, and then thinks it will sell its product back into the U.S. without retribution or consequence, is WRONG! There will be a tax on our soon to be strong border of 35% for these companies wanting to sell their product, cars, A.C. units etc., back across the border. This tax will make leaving financially difficult, but these companies are able to move between all 50 states, with no tax or tariff being charged. Please be forewarned prior to making a very expensive mistake! THE UNITED STATES IS OPEN FOR BUSINESS.

Did China ask us if it was OK to devalue their currency (making it hard for our companies to compete), heavily tax our products going into their country (the U.S. doesn’t tax them) or to build a massive military 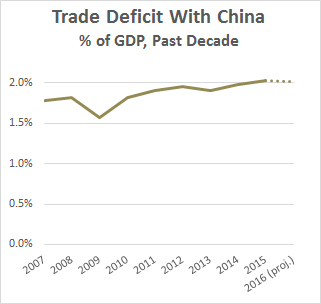 complex in the middle of the South China Sea? I don’t think so!

At the risk of taking Trump literally, rather than seriously, I wonder if he actually thinks he can do this? It’s not as if the president is allowed to unilaterally slap a 35 percent tariff on Carrier air conditioners or Ford Fiestas, after all. If Trump invokes the appropriate “national emergency” authority, he could impose a tariff on all air conditioners or all cars. Or he could impose a tariff on all goods from Mexico or all goods from China. But I think that’s as far as his authority goes. He can’t simply decide to punish one particular company.1

In the case of Mexico, of course, he can’t do even this much unless he persuades Congress to exit NAFTA—and that has a snowball’s chance of happening. He could, in theory, impose a 35 percent tariff on, say, telecom equipment made in China, but that would send up howls of protest from American businesses and almost certain retribution from China.

So…what’s the plan here? The American business community, which would go ballistic over something like this, has been pretty quiet, which suggests they think it’s just blather. That’s my guess too. But I guess you never know. We overeducated elites like to say that stuff like this is just affinity politics—aka red meat for the rubes—but perhaps eventually we’ll learn that we should have taken Trump literally after all.

1As far as I know, anyway. But I would certainly appreciate a detailed explainer on this from someone who’s truly an expert.