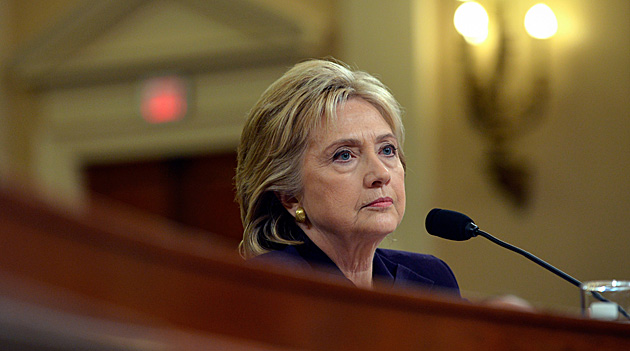 A couple of recent conversations about Hillary Clinton’s email server have prompted me to think that I should write about it one more time. Maybe for the last time. You might wonder why. After all, the damage is done, it’s in the past, and no cares anymore. But I continue to think there’s a lesson here that we haven’t all come to grips with yet.

Here it is: As near as I can tell, Hillary Clinton did nothing wrong. Period. No shilly-shallying, no caveats. It’s true that the optics were sometimes bad, and the whole affair showed off Clinton’s political instincts at their worst. But that’s it. Both legally and ethically, she did nothing wrong. And liberals should have been willing to say so.

But a lot of them weren’t. Both in print and on TV, our defense of Clinton was often tepid and full of qualifications. I noticed the same thing after the Benghazi attack. Conservatives went on the attack literally within a few hours. Some liberals fought back, but an awful lot either said nothing or else mounted half-hearted defenses. Why? Were they worried about looking like hacks even though the plain truth was all they needed to defend? Were they worried that some future revelation might make them look stupid? I’m not sure. But I don’t think anyone will argue when I say that this kind of attitude doesn’t work well in contemporary America.

So here’s a timeline of the email server affair. FAIR WARNING: It’s not a complete timeline. Google has plenty of those for you. It’s a timeline that highlights a few very specific things that I think even a lot of liberals never quite understood. Let’s start:

March 2009: Two months after being confirmed as secretary of state, Hillary Clinton makes the fateful decision to host her unclassified email on a private server.

THIS IS IMPORTANT. Everybody at the State Department has an unclassified email account. In the aughts, most used state.gov alone, but lots of people also used Gmail or another commercial email service. These accounts are used routinely for day-to-day business, but only for unclassified material. 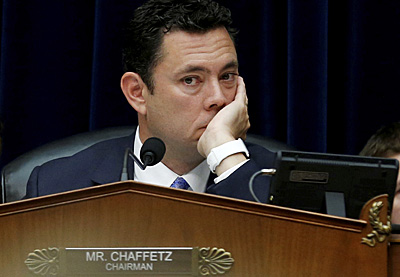 There is an entirely different system for classified communications. The only way that Clinton’s email account differed from a state.gov account is that it was hosted on a private server.

September 12, 2012: The American consulate in Benghazi is attacked. Even though Clinton is literally faultless in this,1 conservatives begin a four-year campaign of investigations, subpoenas, and conspiracy theories that are plainly little more than partisan attacks designed to smear Clinton.

February 2013: Clinton steps down as secretary of state.

September 2013: The National Archives updates its regulations on the handling of email and other public records.

October 2014: After yet another records request in the Benghazi affair, the State Department asks all former secretaries of state for any official records in their possession.

December 2014: After removing her personal emails, Clinton delivers all her official emails to the State Department. Her staff asks Clinton what they should do with the personal emails, and she tells them she no longer needs them. The hosting company in Colorado, Platte River Networks, is instructed to delete Clinton’s existing email archives and to thenceforth preserve new emails for 60 days before deleting them.

March 2015: The New York Times reveals that Clinton’s emails were hosted on a private server. The Benghazi zealots immediately subpoena her email server.

March 2015: A Platte River tech discovers that he never deleted the email archives. At this point, even though Clinton’s staff has notified him not to make any changes (due to the subpoena), he deletes the old archive.

March 2015: Republicans in Congress ask the inspectors general of both the State Department and the intelligence community to review Clinton’s email practices. Their letter states, “We are concerned that diplomatically sensitive, and possibly classified, information may have been transmitted and stored in an insecure manner.” 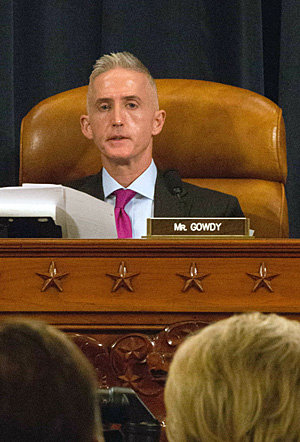 This is the start of the FBI investigation.

THIS IS IMPORTANT: Although the referral came from both IGs, the underlying issue is an ancient feud between the State Department and the CIA. The CIA basically wants to classify everything. The State Department, which has to work in the real world, takes the pragmatic view that classified information sometimes has to be discussed over unclassified channels. It just has to done carefully and circuitously.

July 2016: After a full year, the FBI finally concludes its investigation. Normally, FBI officials merely turn over their recommendations to prosecutors at the Justice Department, but this time FBI Director James Comey decides to host a detailed press conference about the investigation. He says Clinton did nothing illegal, a conclusion that he later describes as “not even a close call.” However, he also declares that Clinton was “extremely careless” with her email.

August 2016: The FBI releases its interview notes, which make it clear that Comey exaggerated wildly in his press conference. Clinton’s archives contained only three trivial emails that were marked classified. A couple of thousand more emails were retroactively classified. Should they have been? The CIA says yes. Clinton says no: They were carefully worded discussions between professionals who knew perfectly well how to conduct conversations like this. Comments from other State Department officials back up Clinton’s view. There was, it turns out, little evidence that anyone was careless, let alone “extremely careless,” but since the emails are now classified, no one will ever know for sure.2

October 2016: Two weeks before Election Day, Comey writes a letter announcing that the FBI has discovered records of emails between Clinton and her aide, Huma Abedin, on the computer of Abedin’s estranged husband, Anthony Weiner. There is nothing unexpected about this. All of Clinton’s aides probably have copies of emails from her, and as we now know, the FBI had no reason to think Abedin’s emails were anything they hadn’t already seen. But Comey declines to say any of this in his letter and the press goes nuts.

November 6, 2016: Comey announces that the investigation is over and none of the Abedin emails were relevant.

November 8, 2016: Donald Trump is elected president of the United States.

So here’s what we’ve got. Clinton used a private server for her unclassified emails. However, that doesn’t provide any reason to think she was any more careless about discussing classified information than any other secretary of state. Nevertheless, Republicans used the excuse of the Benghazi investigation to demand an inspector general’s audit of her emails. The intelligence community, naturally, concluded that Clinton’s archives contained thousands of discussions of classified programs. They would most likely conclude the same thing if they audited the email 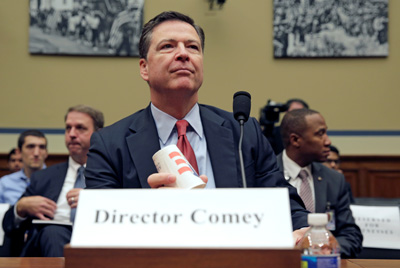 account of any ranking State Department official. It’s just a fact of life that State and CIA disagree about this stuff.

Comey certainly knew this, and he also knew that Clinton had done nothing out of the ordinary. However, in an attempt to appease congressional Republicans, who were sure to go ballistic when their hopes of putting Clinton in the dock failed yet again, he held a press conference where he called her actions “extremely careless.” Then, three months later, with absolutely no justification, he announced that more emails had been discovered—and he announced it in the most damaging possible way.

This is the meat of the whole affair. The rest is chaff. Did Clinton violate the Federal Records Act by holding her email on a private server? Was she trying to evade FOIA requests? Did she lie about wanting to use one email device? Did she violate agency regulations because she used an outside mail account for all her communications, rather than just part of them, as others have routinely done? Etc. etc. We can argue about this stuff forever and we’ll never know the answer. If you hate Clinton, you’ll insist that these are major felonies that should have landed her in a Supermax for life. But if you don’t hate Clinton in the first place, none of these will strike you as anything more than minor infractions at best and ungrounded speculation at worst. Plus there’s this: No one ever came close to investigating any of this, let alone trying to bring charges. Among the folks who know the most about these things, there was never so much as a hint that there was anything illegal among all the sensational accusations.3

The bottom line is simple: There was never any real reason for either the IG investigations or the FBI investigation. And in the end, the FBI found nothing out of the ordinary—just the usual State-CIA squabbling. Nevertheless, under pressure from Republicans, Comey spent a full year on the investigation; 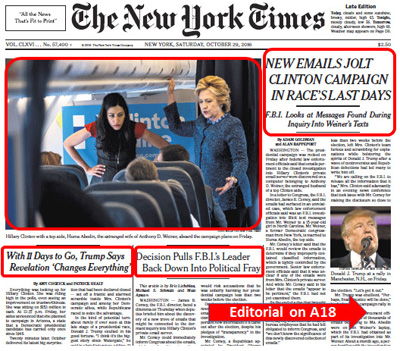 reported its conclusions in the most damaging possible way; and then did it again two weeks before the election. Because of this, Clinton lost about 2 percent of the vote, and the presidency.

Liberals should have defended her with gusto from the start. There was never anything here and no evidence that Clinton did anything seriously wrong. And yet we didn’t. Many liberals just steered clear of the whole thing. Others—including me sometimes—felt like every defense had to contain a series of caveats acknowledging that, yes, the private server was a bad idea, harumph harumph. And some others didn’t even go that far. The result was that in the public eye, both liberals and conservatives were more or less agreeing that there was a lot of smoke here. So smoke there was. And now Donald Trump is a month away from being president.

2As long as we’re on the subject, I’ve long had another beef with Comey’s presentation. He said it was “possible that hostile actors gained access to Secretary Clinton’s personal e-mail account,” but he based that on literally nothing. There was no evidence of any successful hack. None. There was no more possibility of Clinton being hacked than anyone else who did the kinds of things she did.

3The only thing the FBI investigated was whether national security had been compromised. Neither the FBI nor anyone else ever investigated anything else.