ST. JOSEPH, Missouri — On a sunny November afternoon in this historic city, birthplace of the Pony Express and death spot of Jesse James, Lauranda Mignery watched her son Kadin, 2, dig in their front yard. As he played, she scolded him for putting his fingers in his mouth.

In explanation, she pointed to the peeling paint on her old house. Kadin, she said, has been diagnosed with lead poisoning. He has lots of company: Within 15 blocks of his house, at least 120 small children have been poisoned since 2010, making the neighborhood among the most toxic in Missouri.

Of course, it’s not just St. Joseph. Reuters got hold of neighborhood-level lead testing records and found thousands of high-lead communities across the country:

Reuters found nearly 3,000 areas with recently recorded lead poisoning rates at least double those in Flint during the peak of that city’s contamination crisis. And more than 1,100 of these communities had a rate of elevated blood tests at least four times higher.

The poisoned places on this map stretch from Warren, Pennsylvania, a town on the Allegheny River where 36 percent of children tested had high lead levels, to a zip code on Goat Island, Texas, where a quarter of tests showed poisoning. In some pockets of Baltimore, Cleveland and Philadelphia, where lead poisoning has spanned generations, the rate of elevated tests over the last decade was 40 to 50 percent.

Here’s a map of the worst hotspots in the country: 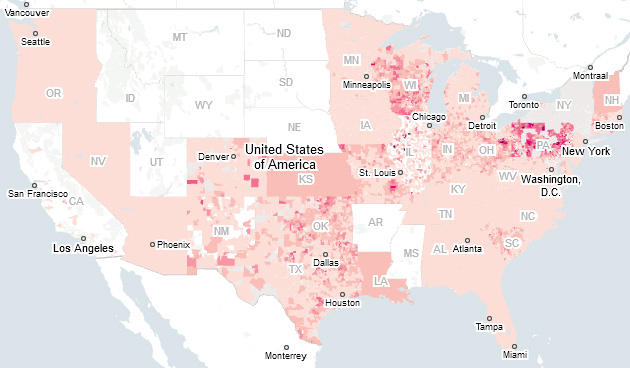 The whole piece is worth reading. My only disappointment is that the authors spent most of the article talking about the dangers of lead paint. That’s worth talking about, but lead-saturated soil is even more worth talking about. That’s why Lauranda Mignery doesn’t want her son digging in their front yard: there may not be any paint there, but there’s probably lots of old lead that settled in the soil decades ago when we were all burning leaded gasoline.