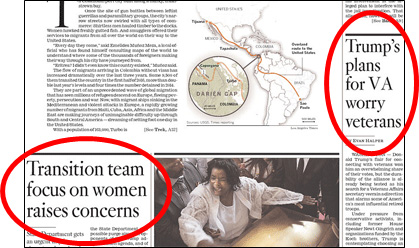 The front page of my morning LA Times happened to feature the headlines on the right. The headline on women reminds me of this Slate piece about how a lot of women who voted for Trump are now worried that he might defund Planned Parenthood. And of course, there’s yesterday’s news about all the business titans who are suddenly concerned that Trump might raise tariffs. Even on the right, it seems like everybody’s worried or alarmed or concerned these days.

We’ve seen dozens and dozens of headlines like this over the past few weeks. An awful lot of Trump backers seem sort of shocked by what’s going on. I mean, he wasn’t serious about all that stuff on the campaign trail, was he?

Who knows? But it looks to me like America has finally adopted a constitutional monarchy. The nice thing about this arrangement is that you have one person, the king or queen, who handles all the ribbon cuttings and so forth, and another person, the prime minister, who can then focus almost entirely on actual governing. In our case, Donald Trump is the new king of America, tweeting out nonsense, going on victory tours, and hobnobbing with famous people at Mar-a-Lago.

And then we have our new prime minister, Mike Pence. Freed from the demands of public appearances, he spends all his time behind closed doors running the country. He wants to kill Planned Parenthood. He wants to privatize the VA. He wants to immiserate millions of people on Obamacare.

Maybe Trump wants some of this stuff too. There’s no telling, really. He mostly seems to be the guy tasked with distracting everyone while Pence fills the cabinet and chats with Paul Ryan about how to run the country. Among other things, this probably means that the business community doesn’t need to worry. Pence and Ryan will talk Trump out of the wall and the tariffs and the replacement for Obamacare. If he starts to balk, they’ll get Jared Kushner to whisper soothingly in his ear and then turn on the TV.

Welcome to the Mike Pence administration.