The Shorenstein Center has published its analysis of 2016 election coverage, and the main takeaway is that it was very, very negative—but not uniformly negative. For most of the campaign, Donald Trump’s coverage was more negative than Hillary Clinton’s, but that suddenly turned around after James Comey’s letter about Clinton’s email was released. In the final two weeks of the campaign, more than a third of Clinton’s coverage was devoted to scandals. At the same time, coverage of Trump turned suddenly less negative.

The result is that during the crucial closing stretch of the campaign, Clinton’s coverage was more negative than Trump’s. It’s hard to look at this and not conclude that Comey’s letter was the key turning point that made Donald Trump president. 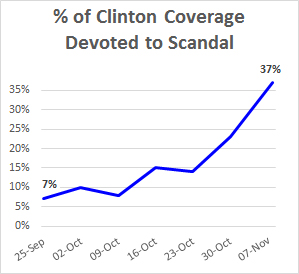 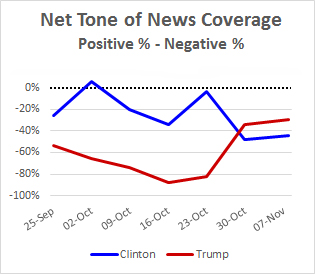 There are lots of other interesting tidbits in the Shorenstein report, but this one in particular struck me:

That’s an astonishingly straight line. For the past half century, news coverage of presidential campaigns has gotten steadily more negative—regardless of who’s running. This is disturbing. It’s easy to believe that the clubby and decorous political coverage of the 50s and 60s deserved to become tougher and more candid. But this doesn’t mean that ever more cynical is the right answer. Does it really stand to reason that a full two-thirds of the coverage of the past three elections—featuring five different candidates—has been negative? I’m hard pressed to see how.

Also, note that 2016 did not generate the most negative coverage of all time. That honor still belongs to 2000. I’m pointing this out as bait for Bob Somerby.