According to the Wall Street Journal, millennials are living in their parents’ basements at record rates:

Almost 40% of young Americans were living with their parents, siblings or other relatives in 2015, the largest percentage since 1940, according to an analysis of census data by real estate tracker Trulia.

Despite a rebounding economy and recent job growth, the share of those between the ages of 18 and 34 doubling up with parents or other 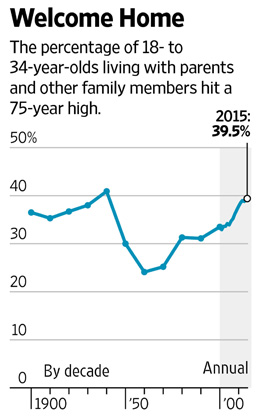 family members has been rising since 2005. Back then, before the start of the last recession, roughly one out of three were living with family.

Hmmm. “Rising since 2005.” I’ll assume that’s technically true, but take a look at the chart that accompanies the Journal piece. The number of young adults living with their parents rose in the 70s. And the 80s. And the aughts. And the teens. Basically, it’s been on an upward trend for nearly half a century. That seems more noteworthy to me than the fact that it failed to blip slightly downward after the Great Recession ended.

Part of the reason, of course, is that people have been getting married and settling down later in life. According to the OECD, the average age at first marriage has increased nearly five years just since 1990, and ranges between 30 and 35 around the world:

The United States is still at the low end of the world average.