Based on the tremendous cost and cost overruns of the Lockheed Martin F-35, I have asked Boeing to price-out a comparable F-18 Super Hornet!

There is nothing that military buffs love more than nerding out about the F-18 vs. the F-35. The F-18 is cheaper! The F-35 is stealthier! The F-18 makes tighter turns! The F-35 is a one-seater! The F-18 is better in a dogfight! The F-35 has better avionics! The F-18 can be fitted with external fuel tanks for longer range! Denmark says the F-35 was a clear winner in its flight tests! Canada says it wants the F-18! This is the kind of argument that Trump fans adore.

But on a substantive level, Trump’s tweet is junior high school stuff. Boeing has been building new variants of the F-18 ever since it was introduced. They’ve already demonstrated upgraded Block III Super Hornets designed (they claim) to perform most of the missions envisioned for the F-35. In other words, they don’t need to “price-out” a “comparable” F-18. They’ve already done it, and everyone in the military is well aware of what 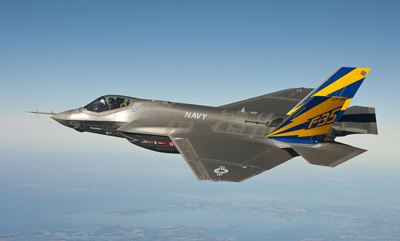 Boeing has to offer. Besides, the F-18 will never be as stealthy as the F-35 and it will never have the same avionics, so there’s no way to ever make it truly comparable anyway.

As near as I can tell, once the F-35 is fully tested, the software constraints are tuned, and its pilots get enough flight hours behind them, the F-35 will be indisputably superior to the F-18 at nearly the same per-unit cost as the latest and greatest Super Hornet. Considering that the F-18 is forty years old, it sure ought to be. The program as a whole may have been an epic disaster, but now that it’s done the F-35 is going to be America’s primary multirole fighter for the next few decades. There’s no going back.

So what’s up? Is Trump just trying to make nice with Boeing after dissing the cost of the new Air Force Ones? Does he think this is a clever tactic to scare Lockheed Martin into offering the F-35 at a lower price? Did some admiral get his attention and gripe about the F-35 being a single-engine airframe? Is he just blowing hot air? As usual, no one knows.