We’ve had a busy day of Trump news. I know you all want to be on top of things, so here’s the latest. First, Trump was asked what he thought about Sen. Lindsey Graham’s statement that sanctions were due against Russia and Vladimir Putin for their hacking during the election. Check out his reply:

I think that computers have complicated lives very greatly. The whole age of computer has made it where nobody knows exactly what is going on. We have speed, we have a lot of other things, but I’m not sure we have the kind the security we need. But I have not spoken with the senators and I will certainly will be over a period of time.

Later, asked about Israeli settlements on the West Bank, Trump produced another bit of word salad that made it clear he had no idea what a settlement even was. This is probably why Trump hasn’t spoken to the press in such a long time. This kind of callow blather might have been entertaining when it was coming from a buffoon candidate who had no chance of winning,1 but not when it’s coming from the president-elect.

In other news, Politico reports that Trump was irritated by President Obama’s comments at Pearl Harbor yesterday. Obama said, “even when hatred burns hottest, even when the tug of tribalism is at its most primal, we must resist the urge to turn inward. We must resist the urge to demonize those who are different.” Those are fairly boilerplate remarks, but “these felt to Trump like direct criticism of the president-elect, according to two people close to Trump.” Gee, I wonder why?

So Trump’s team hears “hatred,” “tribalism,” “demonize those who are different,” and they think, ‘that’s us!” https://t.co/9fdp3Nc0RA pic.twitter.com/ixrRRaVbRB

Finally, Trump announced that Sprint was bringing 5,000 jobs back to America. “I just spoke with the head person,” Trump told Bloomberg. “He said because of me they’re doing 5,000 jobs in this country.” Here’s how it played in the nation’s press: 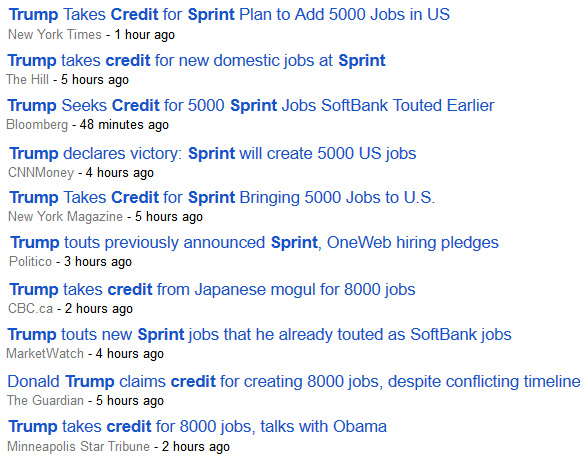 The skepticism in these headlines turns out to be warranted. Trump did indeed desperately try to take credit for this, and you will be unsurprised to learn that he was lying. First of all, Sprint announced these jobs back in April. Here’s the Kansas City Star: “Sprint Corp. is launching a nationwide service to hand-deliver new phones to customers in their homes. The Direct 2 You service, which first rolled out in a Kansas City pilot, will lead to the hiring of about 5,000 mostly full-time employees as it spreads nationwide.”

Second, the Japanese owner of Sprint, Softbank, announced in October that it was creating a huge tech investment fund.

Third, in December, Softbank’s CEO announced the fund again after a meeting with Trump, and said that one part of the whole package was the creation of 50,000 new jobs. Today, Sprint reluctantly conceded that its 5,000 jobs were part of the previously announced 50,000 jobs.

And finally, these jobs were announced yet again today.

That makes four times these jobs have been announced. Donald Trump was responsible for none of them.

1Actually, it wasn’t entertaining even back then.

UPDATE: It turns out the April jobs are different from the October/December jobs. So they’ve only been announced three times.