This should surprise no one:

For the first time, Donald Trump has said he supports finishing construction of the controversial Dakota Access Pipeline….The company behind the pipeline, Energy Transfer Partners, had donated $100,000 to a Trump Victory Fund before the election in the hopes that he’d greenlight it.

….There’s also a seedy financial twist here: Last week, disclosure forms suggested that Trump himself had as much as $300,000 personally invested in the project. That explains why his transition team had to clarify that Trump’s support “has nothing to do with his personal investments and everything to do with promoting policies that benefit all Americans.” 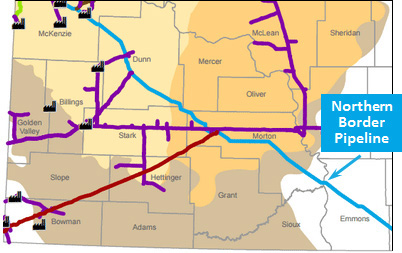 What’s not to like? The only surprising thing is that it took Trump this long. I wonder why it didn’t become a staple of his campaign speech months ago?

MoJo has had lots of coverage of this, so I haven’t spent too much time on it. But there is one thing I’m curious about. There’s already a gas pipeline called the Northern Border Pipeline that crosses the Missouri River at the site of the DAPL project. That’s one of the reasons the DAPL folks want to build there, and I assume it also figures into the Army Corps of Engineers’ thinking. If they approved the gas pipeline decades ago, what justification do they have for not approving a second pipeline in the same place? I only bring this up because I almost never see it mentioned in coverage of the DAPL protests. But surely this has some impact on what the Corps can do legally?