Matthew Cole at the Intercept reports that Rep. Ryan Zinke, Donald Trump’s pick for secretary of the interior, submitted several bogus travel vouchers back in the ’90s, when he was an officer at SEAL Team 6. It turns out he was traveling to Montana not to “scout for 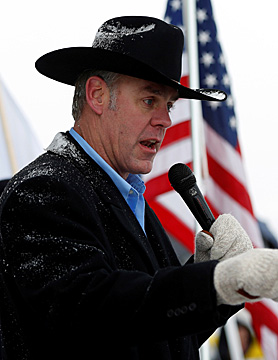 training locations,” but to renovate a house he planned to live in after he retired. He was warned to knock it off.

So far this seems pretty minor. It was nearly 20 years ago, and hardly amounted to a major felony. But then there’s this:

After Zinke was caught and warned, he continued to travel home and submit the expenses to the Navy. The offense would normally have been serious enough to have ended Zinke’s career, but senior officers at SEAL Team 6 did not formally punish him…[Instead] he was told he would not be allowed to return to the elite unit for future assignments, according to the sources. Zinke continued his career, and he was eventually promoted to Navy commander, the rank he retired at in 2008.

So the guy was caught, confessed, warned to stop, and then went right on doing it? If that’s really how it happened, it demonstrates a dedication to corruption a little more serious than the odd bit of expense account twiddling. I guess that makes him perfect for the Trump administration.