Not Everyone Wants to Shop on Amazon

[Chris] Outwater is among the 17% of U.S. primary household shoppers who say they never shop on Amazon, according to data from Kantar Retail ShopperScape. While the percentage has steadily 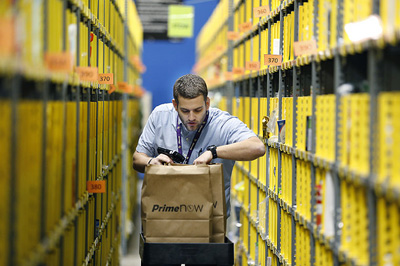 declined over the past five years, roughly 22 million American households didn’t use the retailer this year.

Those Amazon holdouts tend to be older than U.S. shoppers overall, with an average age of 57 versus 49, respectively, according to Kantar, and they tend to earn less—$45,700 in annual income, compared with $62,800 among all shoppers. They are less likely to have or live with children.

Talk about burying the lede. Maybe I just haven’t been paying attention, but the news to me is that 83 percent of “primary household shoppers” shopped at Amazon at least once last year. Compare that to this from a June story in the Journal:

While total online spending comprised 7.8% of all retail purchases in the first quarter, according to the Commerce Department, more than half the population, or about 190 million U.S. consumers, will shop online this year, according to Forrester.

This is roughly 80 percent of all US adults, which jibes pretty well with the Kantar number. Basically, about 80 percent of all US adults shop online at least a little, and every single one of them has shopped at Amazon once or more. In other words, among online shoppers, close to 100 percent have shopped at Amazon. Is there any other retailer on the planet who can claim anything close to that number?