So what are Republicans up to these days? Well, they still want to lock up Hillary Killary, of course. Some of them are threatening to blockade all of her Supreme Court nominees forever. Others are going further, suggesting that Congress should just impeach her sight unseen. They’re claiming the vote is rigged, and some of them are promising the apocalypse if the establishment insists on keeping Donald Trump out of the White House. As for Trump himself, he’s now calling out individual reporters for abuse, prompting supporters at his rallies to surround her and heckle her. He’s promising to sic the Justice Department on Clinton if he wins. Even conservative icon Paul Ryan is in trouble for not being enthusiastic enough about Trump, with his reelection as Speaker of the House now in doubt. And I think we can assume that budget showdowns and 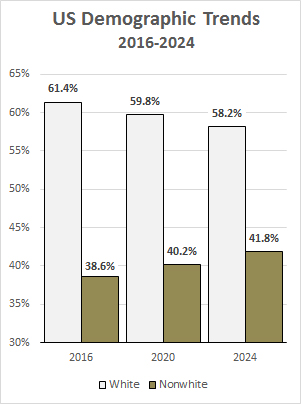 debt ceiling hostage taking will both be back on the table next year.

In the meantime, the Republican Party is 89 percent white. It continues to resist any kind of immigration compromise. It is institutionally opposed to any kind of affirmative action. Republican governors and legislators are almost unanimously in favor of policies designed to suppress the nonwhite vote. They blame Black Lives Matter every time a police officer is shot.

Their candidate wants to ban Muslims from entering the country. He continually tells audiences that the places where black people live are hellholes. He calls out China, Japan, and South Korea repeatedly as countries that are cheating us. Asked about how to heal the racial divide in a nationally televised debate, he mentioned only “law and order” and stop-and-frisk. He calls a Democratic senator Pocahontas as a way of insulting her. I could go on and on.

So what’s my point? Take a look at the chart on the right. If Republicans are having a tough time winning in 2016, even after eight years of Democratic rule and running against a widely-disliked figure, how are they going to win in 2020 when the nonwhite population has grown another 1.6 percent? Or in 2024, when it’s grown 3.2 percent? What’s the strategy here? Keep running the same base-friendly obstructionist playbook and pray for a huge recession or a major terrorist attack?