As many Americans are trying to figure out what kind of president they have just elected, the people of Balmedie, a small village outside the once oil-rich city of Aberdeen, say they have a pretty good idea….They say they watched him win public 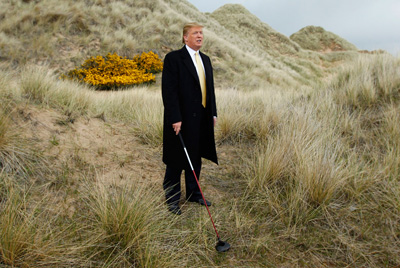 support for his golf course with grand promises, then watched him break them one by one.

A promised $1.25 billion investment has shrunk to what his opponents say is at most $50 million. Six thousand jobs have dwindled to 95. Two golf courses to one. An eight-story, 450-room luxury hotel never materialized, nor did 950 time-share apartments. Instead, an existing manor house was converted into a 16-room boutique hotel. Trump International Golf Links, which opened in 2012, lost $1.36 million last year, according to public accounts….Alex Salmond, a former first minister of Scotland whose government granted Mr. Trump planning permission in 2008, overruling local officials, now concedes the point, saying, “Balmedie got 10 cents on the dollar.”

Sarah Malone, who came to Mr. Trump’s attention after winning a local beauty pageant and is now a vice president of Trump International, disputed some of the figures publicly discussed about the project, saying that Mr. Trump invested about $125 million and that the golf course now employed 150 people.

Of course Malone got her job by winning a beauty pageant. If you’re a woman, this is one of the few proven ways to get Trump’s attention.

On the other hand, Trump did build a wall. It was built primarily as revenge against a few folks who refused to sell him some land he wanted, but still. A wall’s a wall. If the anti-immigration crowd can just figure out someone for Trump to get really mad at, they might get their wall too.