The Wall Street Journal’s Devlin Barrett has the latest from his disgruntled sources at the FBI who are hell-bent on proving that the Clinton Foundation is corrupt: 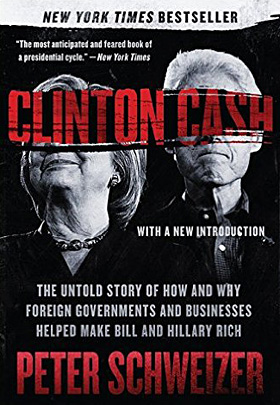 …In February, a meeting was held in Washington among FBI officials, public-integrity prosecutors and Leslie Caldwell, the head of the Justice Department’s criminal division…Following the February meeting, officials at Justice Department headquarters sent a message to all the offices involved to “stand down,” a person familiar with the matter said.

…The FBI had secretly recorded conversations of a suspect in a public-corruption case talking about alleged deals the Clintons made, these people said. The agents listening to the recordings couldn’t tell from the conversations if what the suspect was describing was accurate, but it was, they thought, worth checking out.

Prosecutors thought the talk was hearsay and a weak basis to warrant aggressive tactics, like presenting evidence to a grand jury, because the person who was secretly recorded wasn’t inside the Clinton Foundation.

Holy crap. The field agents got started on this because they read Clinton Cash, the latest in a 25-year stream of books insisting that the Clintons are our era’s Borgia family. Then they got even more interested because some guy—literally just some guy—was recorded blathering about the foundation.

This is what Hillary Clinton has faced ever since 1992. It started in Arkansas, where this kind of character assassination is basically just political sport, and then got exported to Washington, DC, when Bill Clinton ran for the presidency. There’s nothing in Schweizer’s book except yet another CDS victim1 insisting that if two things happened at the same time, somehow the Clintons were responsible for it and he’s got the proof right here!

And now it turns out the FBI is full of middle-aged white guys who apparently read the book, listen to lots of Rush Limbaugh, and just know that if they look a little harder they’ll find the one Jenga brick that causes the whole Clinton edifice to finally collapse. Jesus Christ.