A few weeks ago the New York Times got hold of the first page of Donald Trump’s 1995 tax return. It showed a net operating loss of $916 million, which Trump was able to use to offset his income over the next 20 years, thus avoiding millions of dollars in income taxes. But while solving one mystery, it opened another: Just exactly how did Trump manage to declare such a big loss? Several theories made the rounds, but the Times now thinks it has the answer, thanks to a cache of “newly obtained documents.” Here’s the nutshell version of the Times’ explanation: 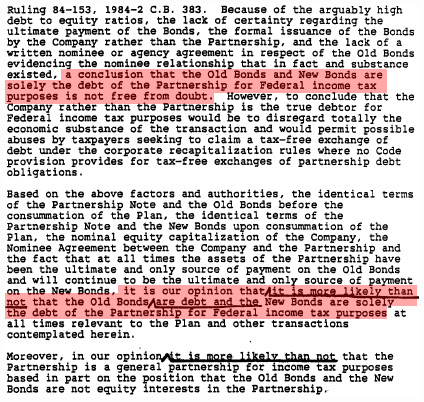 likely be disallowed by the IRS. But we don’t know if it was. The trail stops cold in 1995.

If I’m reading this right, the basic story is that Trump gave his banks “New Bonds” in place of their old bonds and classified the new bonds as equity shares in the casino partnership. Trump then valued the equity as equal to the old debt, thus showing no net loan forgiveness and therefore no COD income. This despite the fact that, in reality, the equity was close to worthless.

So Trump then had $916 million in operating losses, but no debt forgiveness to offset it. “Even in the opaque, rarefied world of gaming impenetrable tax regulations,” says the Times, “this particular maneuver was about as close as a company could get to waving a magic wand and making taxes disappear.”

At this point, the question of how Trump gamed the tax system is mostly a matter of academic interest. Still, I’ve written about this before, and figured I should follow up with the latest theory. And this is it.