Last week a federal judge in Michigan ordered the state to deliver four cases of bottled water each week to families in Flint that need it. On Thursday, the state asked the judge to stay his order, arguing that the court order would “require a ‘Herculean effort’ equivalent to a large-scale military operation and cost the state at least $10.45 million a month, or $125 million annually.” This prompted a reader to ask me what was up. Is Flint’s water still unsafe to drink?

I haven’t checked in on Flint since June, so I figured maybe it was time for an update. I brought up the latest testing results and created a new data point for the past two months, and then added the data point to my old chart using the same metric as always. Here it is: 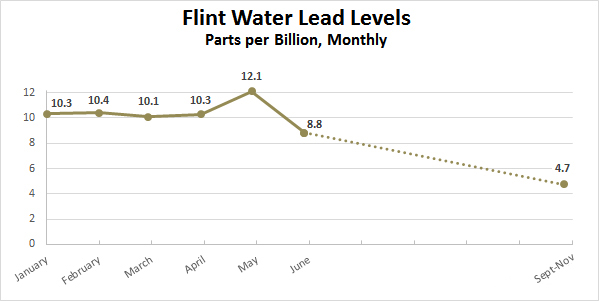 That’s…not bad.1 Using a different measure, it turns out that about 6 percent of Flint homes were over the EPA’s “action limit” of 15 ppb and 1 percent were way over. That’s not great, obviously, but not catastrophic either. The catch is that presumably these measurements were all taken with water filters in place, and the judge’s ruling applied only to homes without filters:

The city is not required to deliver water to residents whose homes have properly installed and working filters, are unoccupied or decline the service. Judge Lawson also ordered that officials provide information in multiple languages, including English, Spanish, Chinese, Arabic and Hmong, to residents about lead levels of city water and how to install filters that properly reduce the contamination.

….Flint had fought the request for deliveries of water, arguing that residents had sufficient access to clean water from distribution centers throughout Flint and at home using filters that the city provided. Judge Lawson disagreed. Residents struggled to properly install the filters because of language barriers, old age, cognitive barriers or a lack of necessary tools, the judge said. Others struggled to retrieve water even from the distribution centers.

I guess I’m a little puzzled. If Flint is getting good results even though lots of homes don’t have working filters, then its water is in pretty good shape and the judge might be overreacting. However, if it’s getting these results because most homes do have working filters, then the judge’s order wouldn’t be all that burdensome and it’s not clear why the state is fighting it. Perhaps someone with deeper knowledge of what’s going on will weigh in on this.